Spitzer Nets Thousands of Galaxies in a Giant Cluster
In just a short amount of time, NASA’s Spitzer Space Telescope has bagged more than a thousand previously unknown dwarf galaxies in a giant cluster of galaxies. 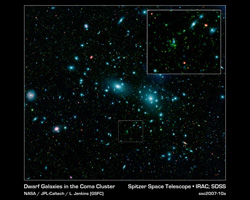 Despite their diminutive sizes, dwarf galaxies play a crucial role in cosmic evolution. Astronomers think they were the first galaxies to form, and they provided the building blocks for larger galaxies. They are by far the most numerous galaxies in our Universe, and are an important tracer of the large-scale structure of the cosmos. Computer simulations of cosmic evolution suggest that high-density regions of the Universe, such as giant clusters, should contain significantly more dwarf galaxies than astronomers have observed to date.

A team led by Leigh Jenkins and Ann Hornschemeier, both at NASA Goddard Space Flight Center in Greenbelt, Md., used Spitzer to study the Coma Berenices cluster, an enormous congregation of galaxies 320 million light-years away in the constellation Coma. The cluster contains hundreds of previously known galaxies that span a volume 20 million light-years across.

Jenkins, Hornschemeier, and their collaborators used data from Spitzer’s Infrared Array Camera (IRAC) to study galaxies at the cluster’s center. They also targeted an outlying region with the goal of comparing the galaxy populations in the different locations to see how environmental variations influence the evolution of galaxies. They stitched together 288 individual Spitzer exposures, each lasting 70 to 90 seconds, into a large mosaic covering 1.3 square degrees of sky. 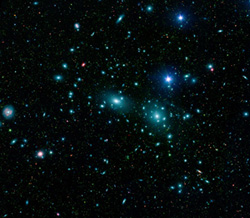 The team found almost 30,000 objects, whose catalog will be made available to the astronomical community. Some of these are galaxies in the Coma cluster, but the team realized that a large fraction had to be background galaxies. Using data taken with the 4-meter (13 foot) William Herschel Telescope on the Canary island of La Palma, team member Bahram Mobasher of the Space Telescope Science Institute, in Baltimore, Md., measured distances to hundreds of galaxies in these fields to estimate what fraction are cluster members.

A surprising number turned out to be Coma galaxies. They appear to be comparable or even smaller in mass to the Small Magellanic Cloud, the Milky Way’s second largest satellite galaxy. Jenkins estimates that about 1,200 of the 30,000 faint objects are dwarf galaxies in Coma, many more than have been identified in the past. Given that the observations only cover a portion of the cluster, the results imply a total dwarf galaxy population of at least 4,000.

Spitzer made these discoveries possible because it can survey large areas of sky very effectively. Even better, infrared observations in space can probe more deeply than ground-based near-infrared surveys because the sky background is up to 10,000 times darker.

"With Spitzer’s superb capabilities, we have suddenly been able to detect thousands of faint galaxies that weren’t seen before," says Jenkins. She is presenting these results on Monday at the American Astronomical Society meeting in Honolulu, Hawaii. The discovery paper will also appear in the Astrophysical Journal. 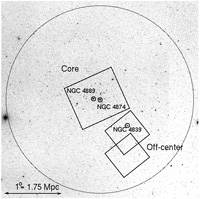 "We’re blowing away previous infrared surveys of nearby clusters," adds Hornschemeier. "Thanks to Spitzer, we can observe nearby clusters such as Coma very deeply in a short amount of time. The total observing time is comparable to just a few nights at a ground-based observatory."

Additional Coma dwarf galaxies might be lurking in the Spitzer data, but more follow-up work is needed to determine how many. Hornschemeier and other astronomers are currently making deeper spectroscopic measurements with the 6.5-meter (21 foot) telescope of the MMT Observatory in Arizona, and the 10-meter (32 foot) Keck telescope in Hawaii, to find out how many of the faintest objects belong to the Coma cluster.