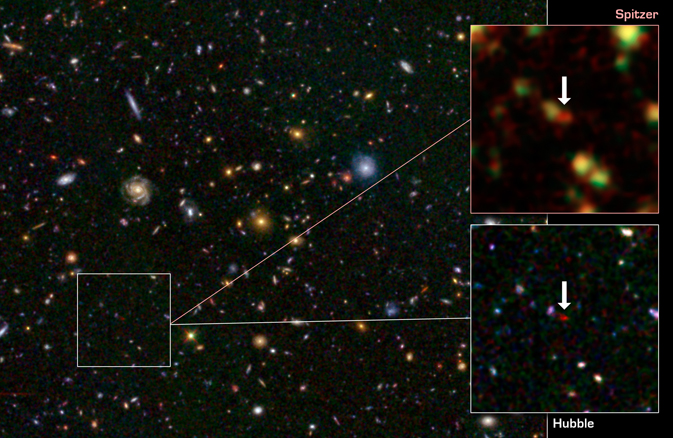 This image shows one of the most distant galaxies known, called GN-108036, dating back to 750 million years after the Big Bang that created our universe. Image credit: NASA/JPL-Caltech/STScI/University of Tokyo
› Full image and caption

Astronomers using NASA's Spitzer and Hubble space telescopes have discovered that one of the most distant galaxies known is churning out stars at a shockingly high rate. The blob-shaped galaxy, called GN-108036, is the brightest galaxy found to date at such great distances.

The galaxy, which was discovered and confirmed using ground-based telescopes, is 12.9 billion light-years away. Data from Spitzer and Hubble were used to measure the galaxy's high star production rate, equivalent to about 100 suns per year. For reference, our Milky Way galaxy is about five times larger and 100 times more massive than GN-108036, but makes roughly 30 times fewer stars per year.

"The discovery is surprising because previous surveys had not found galaxies this bright so early in the history of the universe," said Mark Dickinson of the National Optical Astronomy Observatory in Tucson, Ariz. "Perhaps those surveys were just too small to find galaxies like GN-108036. It may be a special, rare object that we just happened to catch during an extreme burst of star formation."

The international team of astronomers, led by Masami Ouchi of the University of Tokyo, Japan, first identified the remote galaxy after scanning a large patch of sky with the Subaru Telescope atop Mauna Kea in Hawaii. Its great distance was then carefully confirmed with the W.M. Keck Observatory, also on Mauna Kea.

"We checked our results on three different occasions over two years, and each time confirmed the previous measurement," said Yoshiaki Ono of the University of Tokyo, lead author of a new paper reporting the findings in the Astrophysical Journal.

GN-108036 lies near the very beginning of time itself, a mere 750 million years after our universe was created 13.7 billion years ago in an explosive "Big Bang." Its light has taken 12.9 billion years to reach us, so we are seeing it as it existed in the very distant past.

Astronomers refer to the object's distance by a number called its "redshift," which relates to how much its light has stretched to longer, redder wavelengths due to the expansion of the universe. Objects with larger redshifts are farther away and are seen further back in time. GN-108036 has a redshift of 7.2. Only a handful of galaxies have confirmed redshifts greater than 7, and only two of these have been reported to be more distant than GN-108036.

Infrared observations from Spitzer and Hubble were crucial for measuring the galaxy's star-formation activity. Astronomers were surprised to see such a large burst of star formation because the galaxy is so small and from such an early cosmic era. Back when galaxies were first forming, in the first few hundreds of millions of years after the Big Bang, they were much smaller than they are today, having yet to bulk up in mass.

During this epoch, as the universe expanded and cooled after its explosive start, hydrogen atoms permeating the cosmos formed a thick fog that was opaque to ultraviolet light. This period, before the first stars and galaxies had formed and illuminated the universe, is referred to as the "dark ages." The era came to an end when light from the earliest galaxies burned through, or "ionized," the opaque gas, causing it to become transparent. Galaxies similar to GN-108036 may have played an important role in this event.

"The high rate of star formation found for GN-108036 implies that it was rapidly building up its mass some 750 million years after the Big Bang, when the universe was only about five percent of its present age," said Bahram Mobasher, a team member from the University of California, Riverside. "This was therefore a likely ancestor of massive and evolved galaxies seen today."