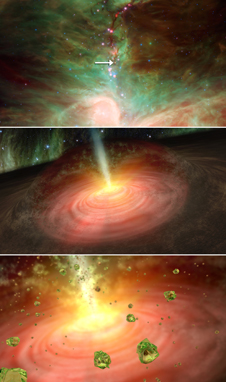 This graphic illustrates a stellar fountain of crystal rain, beginning with a Spitzer picture of the star in question, and ending with an artist's concept of what the crystal "rain" might look like. Image credit: NASA/JPL-Caltech/University of Toledo
› Full image and caption 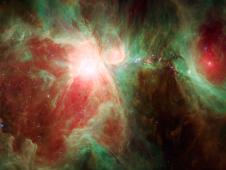 This image from NASA's Spitzer Space Telescope shows what lies near the sword of the constellation Orion. Image credit: NASA/JPL-Caltech/University of Toledo
› Full image and caption 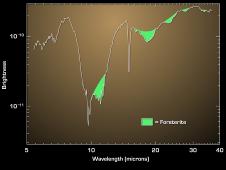 Using NASA's Spitzer Space Telescope, astronomers have, for the first time, found signatures of silicate crystals around a newly forming protostar in the constellation of Orion. Image credit: NASA/JPL-Caltech/University of Toledo
› Full image and caption

PASADENA, Calif. -- Tiny crystals of a green mineral called olivine are falling down like rain on a burgeoning star, according to observations from NASA's Spitzer Space Telescope.

This is the first time such crystals have been observed in the dusty clouds of gas that collapse around forming stars. Astronomers are still debating how the crystals got there, but the most likely culprits are jets of gas blasting away from the embryonic star.

"You need temperatures as hot as lava to make these crystals," said Tom Megeath of the University of Toledo in Ohio. He is the principal investigator of the research and the second author of a new study appearing in Astrophysical Journal Letters. "We propose that the crystals were cooked up near the surface of the forming star, then carried up into the surrounding cloud where temperatures are much colder, and ultimately fell down again like glitter."

Spitzer's infrared detectors spotted the crystal rain around a distant, sun-like embryonic star, or protostar, referred to as HOPS-68, in the constellation Orion.

The crystals are in the form of forsterite. They belong to the olivine family of silicate minerals and can be found everywhere from a periodot gemstone to the green sand beaches of Hawaii to remote galaxies. NASA's Stardust and Deep Impact missions both detected the crystals in their close-up studies of comets.

"If you could somehow transport yourself inside this protostar's collapsing gas cloud, it would be very dark," said Charles Poteet, lead author of the new study, also from the University of Toledo. "But the tiny crystals might catch whatever light is present, resulting in a green sparkle against a black, dusty backdrop."

Forsterite crystals were spotted before in the swirling, planet-forming disks that surround young stars. The discovery of the crystals in the outer collapsing cloud of a proto-star is surprising because of the cloud's colder temperatures, about minus 280 degrees Fahrenheit (minus 170 degrees Celsius). This led the team of astronomers to speculate the jets may in fact be transporting the cooked-up crystals to the chilly outer cloud.

The findings might also explain why comets, which form in the frigid outskirts of our solar system, contain the same type of crystals. Comets are born in regions where water is frozen, much colder than the searing temperatures needed to form the crystals, approximately 1,300 degrees Fahrenheit (700 degrees Celsius). The leading theory on how comets acquired the crystals is that materials in our young solar system mingled together in a planet-forming disk. In this scenario, materials that formed near the sun, such as the crystals, eventually migrated out to the outer, cooler regions of the solar system.

Poteet and his colleagues say this scenario could still be true but speculate that jets might have lifted crystals into the collapsing cloud of gas surrounding our early sun before raining onto the outer regions of our forming solar system. Eventually, the crystals would have been frozen into comets. The Herschel Space Observatory, a European Space Agency-led mission with important NASA contributions, also participated in the study by characterizing the forming star.

"Infrared telescopes such as Spitzer and now Herschel are providing an exciting picture of how all the ingredients of the cosmic stew that makes planetary systems are blended together," said Bill Danchi, senior astrophysicist and program scientist at NASA Headquarters in Washington.

The Spitzer observations were made before it used up its liquid coolant in May 2009 and began its warm mission.

NASA's Jet Propulsion Laboratory in Pasadena, Calif., manages the Spitzer Space Telescope mission for the agency's Science Mission Directorate in Washington. Science operations are conducted at the Spitzer Science Center at the California Institute of Technology in Pasadena. Caltech manages JPL for NASA.