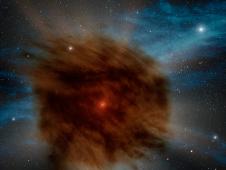 While searching the skies for black holes using NASA's Spitzer Space Telescope, astronomers discovered a giant supernova that was smothered in its own dust. Image credit: NASA/JPL-Caltech/R. Hurt
› Full image and caption

Astronomers using NASA's Spitzer Space Telescope have discovered that a giant star in a remote galaxy ended its life with a dust-shrouded whimper instead of the more typical bang.

Researchers suspect that this odd event -- the first one of its kind ever viewed by astronomers – was more common early in the universe.

It also hints at what we would see if the brightest star system in our Milky Way galaxy exploded, or went supernova.

The discovery is reported in a paper published online in the Astrophysical Journal. The lead author is Christopher Kochanek, a professor of astronomy at Ohio State University, Columbus. Co-author Daniel Stern from JPL led the "Spitzer Deep, Wide-Field Survey" from which this unusual supernova was found.