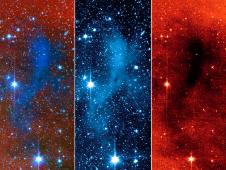 This series of images from NASA's Spitzer Space Telescope shows a dark mass of gas and dust, called a core, where new stars and planets will likely spring up. Image credit: NASA/JPL-Caltech/Observatoire de Paris/CNRS
› Full image and caption 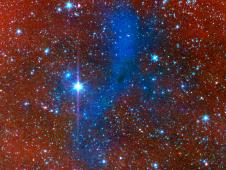 Astronomers have discovered a new, cosmic phenomenon, termed "coreshine," which is revealing new information about how stars and planets come to be.

The scientists used data from NASA's Spitzer Space Telescope to measure infrared light deflecting off cores -- cold, dark cocoons where young stars and planetary systems are blossoming. This coreshine effect, which occurs when starlight from nearby stars bounces off the cores, reveals information about their age and consistency. In a new paper, to be published Friday, Sept. 24, in the journal Science, the team reports finding coreshine across dozens of dark cores.

"Dark clouds in our Milky Way galaxy, far from Earth, are huge places where new stars are born. But they are shy and hide themselves in a shroud of dust so that we cannot see what happens inside," said Laurent Pagani of the Observatoire de Paris and the Centre National de la Recherche Scientifique, both in France. "We have found a new way to peer into them. They are like ghosts because we see them but we also see through them."

Pagani and his team first observed one case of the coreshine phenomenon in 2009. They were surprised to see that starlight was scattering off a dark core in the form of infrared light that Spitzer could see. They had thought the grains of dust making up the core were too small to deflect the starlight; instead, they expected the sunlight would travel straight through. Their finding told them that the dust grains were bigger than previously thought -- about 1 micron instead of 0.1 micron (a typical human hair is about 100 microns).

That might not sound like a big difference, but it can significantly change astronomers' models of star and planet formation. For one thing, the larger grain size means that planets -- which form as dust circling young stars sticks together -- might take shape more quickly. In other words, the tiny seeds for planet formation may be forming very early on, when a star is still in its pre-embryonic phase.

But this particular object observed in 2009 could have been a fluke. The researchers did not know if what they found was true of other dark clouds -- until now. In the new study, they examine 110 dark cores, and find that about half of them exhibit coreshine.

The finding amounts to a new tool for not only studying the dust making up the dark cores, but also for assessing their age. The more developed star-forming cores will have larger dust grains, so, using this tool, astronomers can better map their ages across our Milky Way galaxy. Coreshine can also help in constructing three-dimensional models of the cores -- the deflected starlight is scattered in a way that is dependent on the cloud structures.

Other authors are Aurore Bacmann of the Astrophysics Laboratory of Grenoble, France, and Jürgen Steinacker, Amelia Stutz and Thomas Henning of the Max-Planck Institute for Astronomy, Germany. Steinacker is also with the Observatoire de Paris, and Stutz is also with the University of Arizona, Tucson.

The Spitzer measurements are based on data from the mission's public archive, taken before the telescope ran out of its liquid coolant in May 2009 and began its current warm mission.