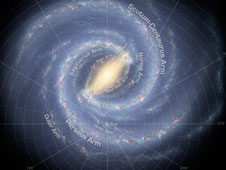 Astronomers studying the Milky Way have discovered a large number of previously unknown regions where massive stars are being formed. Their discovery, made with the help of NASA's Spitzer Space Telescope, provides important new information about the structure of our home galaxy and promises to yield new clues about its composition.

The star-forming regions the astronomers sought, called H II regions, are sites where hydrogen atoms are stripped of their electrons by intense radiation from massive, young stars. To find these regions, hidden from visible-light detection by the Milky Way's gas and dust, the researchers used infrared and radio telescopes.

"We found our targets by using the results of infrared surveys done with NASA's Spitzer Space Telescope and of surveys done with the National Science Foundation's Very Large Array radio telescope," said astronomer Loren Anderson of the Astrophysical Laboratory of Marseille in France, who worked on the project. "Objects that appear bright in both the Spitzer and Very Large Array images we studied are good candidates for H II regions."