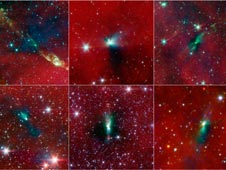 New evidence from NASA's Spitzer Space Telescope is showing that tight-knit twin stars might be triggered to form by asymmetrical envelopes like the ones shown in this image.
Image credit: NASA/JPL-Caltech/Univ. of Michigan
› Full image and caption How Binary Stars May Form

Our sun may be an only child, but most of the stars in the galaxy are actually twins. The sibling stars circle around each other at varying distances, bound by the hands of gravity.

How twin stars form is an ongoing question in astronomy. Do they start out like fraternal twins developing from two separate clouds, or "eggs”? Or do they begin life in one cloud that splits into two, like identical twins born from one egg? Astronomers generally believe that widely spaced twin, or binary, stars grow from two separate clouds, while the closer-knit binary stars start out from one cloud. But how this latter process works has not been clear.

New observations from NASA's Spitzer Space Telescope are acting like sonograms to reveal the early birth process of snug twin stars. The infrared telescope can see the structure of the dense, dusty envelopes surrounding newborn stars in remarkable detail. These envelopes are like wombs feeding stars growing inside -- the material falls onto disks spinning around the stars, and then is pulled farther inward by the fattening stars.

The Spitzer pictures reveal blob-like, asymmetrical envelopes for nearly all of 20 objects studied. According to astronomers, such irregularities might trigger binary stars to form.

"We see asymmetries in the dense material around these proto-stars on scales only a few times larger than the size of the solar system. This means that the disks around them will be fed unevenly, possibly enhancing fragmentation of the disk and triggering binary star formation," said John Tobin of the University of Michigan, Ann Arbor, lead author of a recent paper in the Astrophysical Journal.

All stars, whether they are twins or not, form from collapsing envelopes, or clumps, of gas and dust. The clumps continue to shrink under the force of gravity, until enough pressure is exerted to fuse atoms together and create an explosion of energy.

Theorists have run computer simulations in the past to show that irregular-shaped envelopes may cause the closer twin stars to form. Material falling inward would be concentrated in clumps, not evenly spread out, seeding the formation of two stars instead of one. But, until now, observational evidence for this scenario was inconclusive.

Tobin and his team initially did not set out to test this theory. They were studying the effects of jets and outflows on envelopes around young stars when they happened to notice that almost all the envelopes were asymmetrical. This led them to investigate further -- 17 of 20 envelopes examined were shaped like blobs instead of spheres. The remaining three envelopes were not as irregular as the others, but not perfectly round either. Many of the envelopes were already known to contain embryonic twin stars – possibly caused by the irregular envelopes.

"We were really surprised by the prevalence of asymmetrical envelope structures," said Tobin. "And because we know that most stars are binary, these asymmetries could be indicative of how they form."

Spitzer was able to catch such detailed views of these stellar eggs because it has highly sensitive infrared vision, which can detect the faint infrared glow from our Milky Way galaxy itself. The dusty envelopes around the young stars block background light from the Milky Way, creating the appearance of a shadow in images from Spitzer.

"Traditionally, these envelopes have been observed by looking at longer infrared wavelengths where the cold dust is glowing. However, those observations generally have much lower resolution than the Spitzer images," said Tobin.

Further study of these envelopes, examining the velocity of the material falling onto the forming stars using radio-wavelength telescopes, is already in progress. While the researchers may not yet be able to look at a picture of a stellar envelope and declare "It's twins," their work is offering important clues to help solve the mystery of how twin stars are born.

Other authors of this study include Lee Hartmann of the University of Michigan, Ann Arbor; and Hsin-Fang Chiang and Leslie Looney of the University of Illinois, Urbana-Champaign. The observations were made before Spitzer ran out its liquid coolant in May 2009, beginning its "warm" mission.