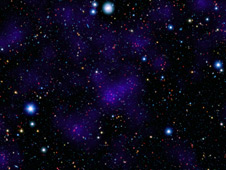 A surprisingly large collection of galaxies (red dots in center) stands out at a remarkably large distance in this composite image combining infrared and visible-light observations. Image credit: NASA/JPL-Caltech/Subaru
› Full image and caption

Astronomers are a bit like archeologists as they dig back through space and time searching for remnants of the early universe. In a recent deep excavation, courtesy of NASA's Spitzer Space Telescope, astronomers unearthed what may be the most distant, primitive cluster of galaxies ever found.

In a twist, however, this apparent ancestor to today's "big cities" of grouped galaxies looks shockingly modern. Called CLG J02182-05102, the ancient cluster is dominated by old, red and massive galaxies, typical of present-day clusters. For example, it is similar to a young version of the Coma Cluster of today, which has had billions of more years to develop.

"We are seeing something already aged and red like a younger version of the Coma Cluster from a distant, bygone era," said Casey Papovich, lead author of a new study and an assistant professor of physics and astronomy at Texas A&M University in College Station.

Papovich added, "it is as though we dug an archeological site in Rome and found pieces of modern Rome in amongst the ruins."

ClG J02182-05102 might have indeed been ahead of its time. Just as Rome was the world's biggest city more than 2,000 years ago with a population of about a million residents - a figure not again matched until the early 1800s in London - so too was this galactic grouping an advanced civilization for so early an era in the developing universe.

Galaxy clusters are the largest gravitationally bound structures in the universe and are thought to have formed piecemeal over cosmic time. For now, ClG J02182-05102 is the only known galactic grouping so far away in the past, and studying it will help researchers understand the overall history of how galaxies congregate and evolve.

In their hunt for rare ancient cities in the early universe, Papovich and his team started with the largest extragalactic survey ever made. Called the Spitzer Wide-area InfraRed Extragalactic (SWIRE) survey, it observed a huge portion of the sky that could contain 250 full moons.

Because more light gathered means more information, the researchers looked at a cosmic region within this giant starscape that had also been studied by other instruments. These additional observations came from a survey combining light from Japan's Subaru telescope - housed atop Mauna Kea, Hawaii - and the European Space Agency's orbiting XMM-Newton telescope. The United Kingdom Infra-Red Telescope, also in Hawaii, provided infrared data along with another set of Spitzer observations called the Public Ultra Deep Sky survey.

When all these data were compiled, Spitzer's infrared observations made dozens of distant galaxies jump out. "We would not have found this object without Spitzer because there is very little optical light coming from this group of galaxies," said Papovich.

His team then obtained time on the Magellan telescope in Chile to study the faint light coming from ClG J02182-05102's least-dim galaxies. This light allowed the astronomers to archeologically date the candidate cluster to 9.6 billion years ago.

With these observations, Papovich and his team confirmed that seven of ClG J02182-05102's galaxies have nearly the same distance, suggesting they are part of a grouping of about 60 galaxies. Whether or not this association of galaxies fully qualifies as a gravitationally bound cluster will rely on further observations. Furthermore, the definition of a "cluster" itself remains unsettled, somewhat like the blurry distinctions between a city and a town, made trickier still given the limited light that makes it to our telescopes from these relics.

For now, ClG J02182-05102 stands out as a greatly over-dense region of galaxies - a metropolis in a land of isolated villages. At its center regions loom red, monster galaxies containing about 10 times as many stars as our Milky Way galaxy. This puts them on par with the most mammoth galaxies in the nearby universe, which have grown fat through repeated mergers with other galaxies. These big galaxies are so uncharacteristic of those in the early universe that in some sense it is like finding modern skyscrapers in ancient Rome.

The Papovich et al paper was accepted for publication in the Astrophysical Journal on April 21, 2010. A subsequent study by Masayuki Tanaka of the Institute for the Physics and Mathematics of the Universe in Japan confirmed the discovery, and the work was the subject of a news release on May 10, 2010.