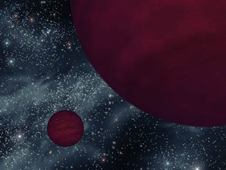 
An international team of astronomers using several telescopes has discovered what appears to be the coolest star-like body known, a brown dwarf called SDSS1416+13B. The dim ball of gas is roughly 400 degrees Fahrenheit (200 degrees Celsius). NASA's Spitzer Space Telescope helped nail down the temperature of the object by observing at a particular range of light called mid-infrared.

Too small to be stars, brown dwarfs have masses lower than stars but larger than gas-giant planets like Jupiter. Due to their low temperature, these objects are very faint in visible light, and are detected by their glow at infrared wavelengths. They were originally dubbed "brown dwarfs" long before any were actually discovered, to describe bodies that are cooler, fainter and redder than "red dwarf" stars, with the color brown representing the mix of red and black.