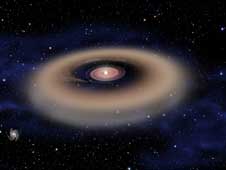 This artist's conception shows a Jupiter-sized planet forming from a disk of dust and gas surrounding a young, massive star. The planet's gravity has cleared a gap in the disk. Of more than 500 stars examined in the W5 star-forming region, 15 show evidence of central clearing that may be due to forming planets.
Image credit: David A. Aguilar, CfA
› Larger image
Most searches for planets around other stars, also known as exoplanets, focus on sun-like stars. Those searches have proven successful, turning up more than 400 alien worlds. However, sun-like stars aren't the only potential homes for planets. New research from NASA's Spitzer Space Telescope and the Two Micron All-Sky Survey confirms that planet formation is a natural by-product of star formation, even around stars much heftier than the sun.