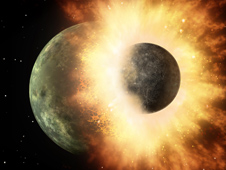 This artist's concept shows a celestial body about the size of our moon slamming at great speed into a body the size of Mercury.
› Full image and caption

Astronomers say that two rocky bodies, one as least as big as our moon and the other at least as big as Mercury, slammed into each other within the last few thousand years or so -- not long ago by cosmic standards. The impact destroyed the smaller body, vaporizing huge amounts of rock and flinging massive plumes of hot lava into space. An artist's animation of the event is at http://www.nasa.gov/mission_pages/spitzer/multimedia/spitzer-20090810.html .

Spitzer's infrared detectors were able to pick up the signatures of the vaporized rock, along with pieces of refrozen lava, called tektites.

"This collision had to be huge and incredibly high-speed for rock to have been vaporized and melted," said Carey M. Lisse of the Johns Hopkins University Applied Physics Laboratory, Laurel, Md., lead author of a new paper describing the findings in the Aug. 20 issue of the Astrophysical Journal. "This is a really rare and short-lived event, critical in the formation of Earth-like planets and moons. We're lucky to have witnessed one not long after it happened."

Lisse and his colleagues say the cosmic crash is similar to the one that formed our moon more than 4 billion years ago, when a body the size of Mars rammed into Earth.

"The collision that formed our moon would have been tremendous, enough to melt the surface of Earth," said co-author Geoff Bryden of NASA's Jet Propulsion Laboratory, Pasadena, Calif. "Debris from the collision most likely settled into a disk around Earth that eventually coalesced to make the moon. This is about the same scale of impact we're seeing with Spitzer -- we don't know if a moon will form or not, but we know a large rocky body's surface was red hot, warped and melted."

Our solar system's early history is rich with similar tales of destruction. Giant impacts are thought to have stripped Mercury of its outer crust, tipped Uranus on its side and spun Venus backward, to name a few examples. Such violence is a routine aspect of planet building. Rocky planets form and grow in size by colliding and sticking together, merging their cores and shedding some of their surfaces. Though things have settled down in our solar system today, impacts still occur, as was observed last month after a small space object crashed into Jupiter.

Lisse and his team observed a star called HD 172555, which is about 12 million years old and located about 100 light-years away in the far southern constellation Pavo, or the Peacock (for comparison, our solar system is 4.5 billion years old). The astronomers used an instrument on Spitzer, called a spectrograph, to break apart the star's light and look for fingerprints of chemicals, in what is called a spectrum. What they found was very strange. "I had never seen anything like this before," said Lisse. "The spectrum was very unusual."

After careful analysis, the researchers identified lots of amorphous silica, or essentially melted glass. Silica can be found on Earth in obsidian rocks and tektites. Obsidian is black, shiny volcanic glass. Tektites are hardened chunks of lava that are thought to form when meteorites hit Earth.

Large quantities of orbiting silicon monoxide gas were also detected, created when much of the rock was vaporized. In addition, the astronomers found rocky rubble that was probably flung out from the planetary wreck.

The mass of the dust and gas observed suggests the combined mass of the two charging bodies was more than twice that of our moon.

Their speed must have been tremendous as well -- the two bodies would have to have been traveling at a velocity relative to each other of at least 10 kilometers per second (about 22,400 miles per hour) before the collision.

Spitzer has witnessed the dusty aftermath of large asteroidal impacts before, but did not find evidence for the same type of violence -- melted and vaporized rock sprayed everywhere. Instead, large amounts of dust, gravel, and boulder-sized rubble were observed, indicating the collisions might have been slower-paced. "Almost all large impacts are like stately, slow-moving Titanic-versus-the-iceberg collisions, whereas this one must have been a huge fiery blast, over in the blink of an eye and full of fury," said Lisse.

JPL manages the Spitzer mission for NASA's Science Mission Directorate, Washington. Science operations are conducted at the Spitzer Science Center at the California Institute of Technology in Pasadena. Caltech manages JPL for NASA. Spitzer's infrared spectrograph, which made the observations in 2004 before the telescope began its "warm" mission, was built by Cornell University, Ithaca, N.Y. Its development was led by Jim Houck of Cornell.