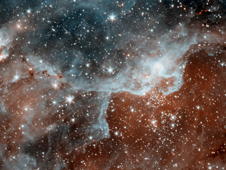 These images are some of the first to be taken during Spitzer's warm mission -- a new phase that began after the telescope, which operated for more than five-and-a-half years, ran out of liquid coolant. Image credit: NASA/JPL-Caltech
Full image and caption

PASADENA, Calif. -- NASA's Spitzer Space Telescope is starting a second career and taking its first shots of the cosmos since warming up.

The infrared telescope ran out of coolant May 15, 2009, more than five-and-a-half-years after launch. It has since warmed to a still-frosty 30 degrees Kelvin (about minus 406 degrees Fahrenheit).

New images taken with two of Spitzer's infrared detector channels -- two that work at the new, warmer temperature -- demonstrate the observatory remains a powerful tool for probing the dusty universe. The images show a bustling star-forming region, the remains of a star similar to the sun, and a swirling galaxy lined with stars.

"The performance of the two short wavelength channels of Spitzer's infrared array camera is essentially unchanged from what it was before the observatory's liquid helium was exhausted," said Doug Hudgins, the Spitzer program scientist at NASA Headquarters in Washington. "To put that in perspective, that means Spitzer's sensitivity at those wavelengths is still roughly the same as a 30-meter ground-based telescope. These breathtaking images demonstrate Spitzer will continue to deliver world-class imagery and science during its warm mission."

The first of three images shows a cloud bursting with stars in the Cygnus region of our Milky Way galaxy. Spitzer's infrared eyes peer through and see dust, revealing young stars tucked in dusty nests. A second image shows a nearby dying star -- a planetary nebula called NGC 4361 -- which has outer layers that expand outward in the rare form of four jets. The last picture is of a classic spiral galaxy called NGC 4145, located approximately 68 million light-years from Earth.

"With Spitzer's remaining shorter-wavelength bands, we can continue to see through the dust in galaxies and get a better look at the overall populations of stars," said Robert Hurt, imaging specialist for Spitzer at NASA's Spitzer Science Center at the California Institute of Technology in Pasadena. "All stars are equal in the infrared."

Since its launch from Cape Canaveral, Fla., on Aug. 25, 2003, Spitzer has made many discoveries. They include planet-forming disks around stars, the composition of the material making up comets, hidden black holes, galaxies billions of light-years away and more.

Perhaps the most revolutionary and surprising Spitzer finds involve planets around other stars, called exoplanets. In 2005, Spitzer detected the first photons of light from an exoplanet. In a clever technique, now referred to as the secondary-eclipse method, Spitzer was able to collect the light of a hot, gaseous exoplanet and learn about its temperature. Later detailed studies revealed more about the composition and structure of the atmospheres of these exotic worlds.

Warm Spitzer will address many of the same science questions as before. It also will tackle new projects, such as refining estimates of Hubble's constant, or the rate at which our universe is stretching apart; searching for galaxies at the edge of the universe; characterizing more than 700 near-Earth objects, or asteroids and comets with orbits that pass close to our planet; and studying the atmospheres of giant gas planets expected to be discovered soon by NASA's Kepler mission.

As during the cold Spitzer mission, these and the other programs are selected by a competition in which scientists from around the world are invited to participate.

JPL manages the Spitzer Space Telescope mission for NASA's Science Mission Directorate in Washington. Science operations are conducted at the Spitzer Science Center at the California Institute of Technology.