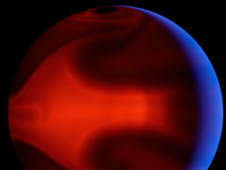 These computer-generated images chart the development of severe weather patterns on the highly eccentric exoplanet HD 80606b during the days after its closest approach to its parent star.
› Full image and caption


PASADENA, Calif. -- NASA's Spitzer Space Telescope has observed a planet that heats up to red-hot temperatures in a matter of hours before quickly cooling back down.

The "hot-headed" planet is HD 80606b, a gas giant that orbits a star 190 light-years from Earth. It was already known to be quite unusual, with an orbit shuttling it nearly as far out as Earth is from our sun, and much closer in than our planet Mercury.  Astronomers used Spitzer, an infrared observatory, to measure heat emanating from the planet as it whipped behind and close to its star. In just six hours, the planet's temperature rose from 800 to 1,500 Kelvin (980 to 2,240 degrees Fahrenheit).

"We watched the development of one of the fiercest storms in the galaxy," said astronomer Greg Laughlin of the Lick Observatory, University of California at Santa Cruz. "This is the first time that we've detected weather changes in real time on a planet outside our solar system." Laughlin is lead author of a new report about the discovery appearing in the Jan. 29 issue of Nature.

HD 80606b was originally discovered in 2001 by a Swiss planet-hunting team led by Dominique Naef of the Geneva Observatory in Switzerland. Using a method known as the Doppler-velocity technique, the astronomers learned that the planet is wildly eccentric, with an orbit more like a comet's than a planet's. HD 80606b's orbit takes it as far out as 0.85 astronomical units from its star, and as close in as 0.03 astronomical units (one astronomical unit is the distance between Earth and the sun). 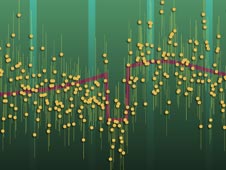 This figure charts 30 hours of observations taken by NASA's Spitzer Space Telescope of a strongly irradiated exoplanet (an planet orbiting a star beyond our own).
› Full image and caption


The planet takes about 111 days to circle its star, but it spends most of its time at farther distances while zipping through the closest part of its orbit in less than a day. (This is a consequence of Kepler's Second Law of Planetary Motion, which states that orbiting bodies -- planets and comets -- sweep out an equal area in equal time.)

"If you could float above the clouds of this planet, you'd see its sun growing larger and larger at faster and faster rates, increasing in brightness by almost a factor of 1,000," said Laughlin.

Spitzer observed HD 80606b before, during and just after its closest passage to the star in November of 2007, as the planet sizzled under the star's heat. When Laughlin and his colleagues planned the observation, they did not know whether the planet would disappear completely behind the star, an event called a secondary eclipse, or whether it would remain in view. Luckily for the team, the planet did indeed temporarily disappear from view, providing the planet's initial and final temperatures (had the planet had not been eclipsed, the team would have known only the temperature change without knowing the starting point).

The extreme temperature swing observed by Spitzer indicates that the air near the planet's gaseous surface must quickly absorb and lose heat. This type of atmospheric information revealing how a planet responds to sudden changes in heating -- an extreme version of seasonal change -- had never been obtained before for any exoplanet (a planet orbiting another star). 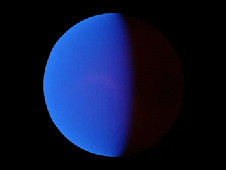 This animation shows a computer simulation of the planet HD 80606b from an observer located at a point in space lying between the Earth and the HD 80606 system.
› Play video


"By studying this planet under such extreme circumstances, we figure out how it handles heat -- does it retain it or dissipate it? In this case, the answer is that the planet releases the heat right away," said Laughlin. "We were essentially able to perform the 'thought experiment' -- what would happen to a planet like Jupiter if we could drag it very close to the sun?"

Laughlin and his colleagues say that a key factor in being able to make the observations is the planet's eccentric orbit. Unlike so-called hot Jupiter planets that remain in tight orbits around their stars, HD 80606b rotates around its axis roughly every 34 hours. Hot Jupiters, on the other hand, are thought to be tidally locked like our moon, so one side always faces their stars. Because HD 80606b spins on its axis many times per orbit, the astronomers were able to measure how its atmosphere responds to being baked by the star.

Amateur and professional astronomers alike are gearing up to observe HD 80606b this coming Valentine's Day, when it will swing around the front of its star. There's a 15 percent chance that the planet will eclipse its star, an event known as the primary transit. If so, the event would not only be remarkable to see, but would also provide more details about the nature of this temperamental world.