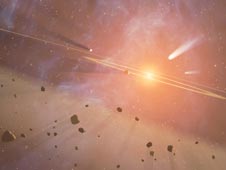 The star at the center of the nearby system, called Epsilon Eridani, is a younger, slightly cooler and fainter version of the sun. Previously, astronomers had uncovered evidence for two possible planets in the system, and for a broad, outer ring of icy comets similar to our own Kuiper Belt.

Now, Spitzer has discovered that the system also has dual asteroid belts. One sits at approximately the same position as the one in our solar system. The second, denser belt, most likely also populated by asteroids, lies between the first belt and the comet ring. The presence of the asteroid belts implies additional planets in the Epsilon Eridani system.

"This system probably looks a lot like ours did when life first took root on Earth," said Dana Backman, an astronomer at the SETI Institute, in Mountain View, Calif., and outreach director for NASA's Sofia mission. "The main difference we know of so far is that it has an additional ring of leftover planet construction material." Backman is lead author of a paper about the findings to appear Jan. 10 in the Astrophysical Journal. 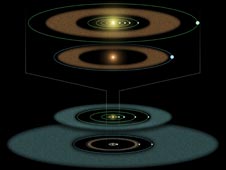 This artist's diagram compares the Epsilon Eridani system to our own solar system. Image credit: NASA/JPL-Caltech
Full image and caption

Asteroid belts are rocky and metallic debris left over from the early stages of planet formation. Their presence around other stars signals that rocky planets like Earth could be orbiting in the system's inner regions, with massive gas planets circling near the belts' rims. In our own solar system, for example, there is evidence that Jupiter, which lies just beyond our asteroid belt, caused the asteroid belt to form long ago by stirring up material that would have otherwise coalesced into a planet. Nowadays, Jupiter helps keep our asteroid belt confined to a ring.

Astronomers have detected stars with signs of multiple belts of material before, but Epsilon Eridani is closer to Earth and more like our sun overall. It is 10 light-years away, slightly less massive than the sun, and roughly 800 million years old, or one-fifth the age of the sun.

Because the star is so close and similar to the sun, it is a popular locale in science fiction. The television series Star Trek and Babylon 5 referenced Epsilon Eridani, and it has been featured in novels by Issac Asimov and Frank Herbert, among others.

The popular star was also one of the first to be searched for signs of advanced alien civilizations using radio telescopes in 1960. At that time, astronomers did not know of the star's young age.

Spitzer observed Epsilon Eridani with both of its infrared cameras and its infrared spectrometer. When asteroid and comets collide or evaporate, they release tiny particles of dust that give off heat, which Spitzer can see. "Because the system is so close to us, Spitzer can really pick out details in the dust, giving us a good look at the system's architecture," said co-author Karl Stapelfeldt of NASA's Jet Propulsion Laboratory, Pasadena, Calif.

Some researchers had reported that Epsilon Eridani b orbits in an exaggerated ellipse ranging between 1 and 5 astronomical units, but this means the planet would cross, and quickly disrupt, the newfound asteroid belt. Instead, Backman and colleagues argue that this planet must have a more circular orbit that keeps it just outside the belt.

The other candidate planet was first proposed in 1998 to explain lumpiness observed in the star's outer comet ring. It is thought to lie near the inner edge of the ring, which orbits between 35 and 90 astronomical units from Epsilon Eridani.

The intermediate belt detected by Spitzer suggests that a third planet could be responsible for creating and shepherding its material. This planet would orbit at approximately 20 astronomical units and lie between the other two planets. "Detailed studies of the dust belts in other planetary systems are telling us a great deal about their complex structure," said Michael Werner, co-author of the study and project scientist for Spitzer at JPL. "It seems that no two planetary systems are alike."

JPL manages the Spitzer mission for NASA's Science Mission Directorate, Washington. Science operations are conducted at the Spitzer Science Center at the California Institute of Technology in Pasadena. Caltech manages JPL for NASA. More information about Spitzer is at http://www.spitzer.caltech.edu/spitzer and http://www.nasa.gov/spitzer . More information about extrasolar planets and NASA's planet-finding program is at http://planetquest.jpl.nasa.gov .