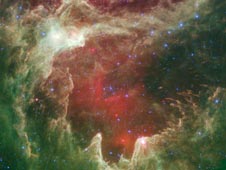 It also provides dramatic new evidence that massive stars -- through their brute winds and radiation -- can trigger the birth of stellar newborns.

"Triggered star formation continues to be very hard to prove," said Xavier Koenig of the Harvard Smithsonian Center for Astrophysics in Cambridge, Mass. "But our preliminary analysis shows that the phenomenon can explain the multiple generations of stars seen in the W5 region." Koenig is lead author of a paper about the findings in the December 1, 2008, issue of the Astrophysical Journal.

The image, which can be seen at http://www.nasa.gov/mission_pages/spitzer/multimedia/20080722.html, is being unveiled today at 12:30 p.m. Pacific Time at the Griffith Observatory, Los Angeles, as part of Spitzer's five-year anniversary celebration. Spitzer launched on August 25, 2003, from Cape Canaveral Air Force Station, Fla.

The most massive stars in the universe form out of thick clouds of gas and dust. The stars are so massive, ranging from 15 to about 60 times the mass of our sun, that some of their material slides off in the form of winds. The scorching-hot stars also blaze with intense radiation. Over time, both the wind and radiation blast away surrounding cloud material, carving out expanding cavities.

Astronomers have long suspected that the carving of these cavities causes gas to compress into successive generations of new stars. As the cavities grow, it is believed that more and more stars arise along the cavities' expanding rims. The result is a radial "family tree" of stars, with the oldest in the middle of the cavity, and younger and younger stars farther out.

Evidence for this theory can be seen easily in pictures of many star-forming regions, such as W5, Orion and Carina. For example, in the new Spitzer picture of W5, the most massive stars (some of the blue dots) are at the center of two hollow cavities, and younger stars (pink or white) are embedded in the elephant-trunk-like pillars as well as beyond the cavity rim. However, it is possible that the younger stars just happen to be near the edge of the cavities and were not triggered by the massive stars.

Koenig and his colleagues set out to test the triggered star-formation theory by studying the ages of the stars in the W5 region. They used Spitzer's infrared vision to peer through the dusty clouds and get a better look at the stars' various stages of evolution. They found that stars within the W5 cavities are older than stars at the rims, and even older than stars farther out past the rim. This ladder-like separation of ages provides some of the best evidence yet that massive stars do, in fact, give rise to younger generations.

"Our first look at this region suggests we are looking at one or two generations of stars that were triggered by the massive stars," said co-author Lori Allen of the Harvard-Smithsonian Center for Astrophysics. "We plan to follow up with even more detailed measurements of the stars' ages to see if there is a distinct time gap between the stars just inside and outside the rim."

Millions of years from now, the massive stars in W5 will die in tremendous explosions. When they do, they will destroy some of the young nearby stars -- the same stars they might have triggered into being.

W5 spans an area of sky equivalent to four full moons and is about 6,500 light-years away in the constellation Cassiopeia. The Spitzer picture was taken over a period of 24 hours. The color red shows heated dust that pervades the region's cavities. Green highlights the dense clouds, and white knotty areas are where the youngest of stars are forming. The blue dots are older stars in the star-forming cloud, as well as unrelated stars behind and in front of the cloud.