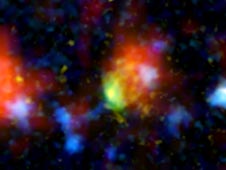 The green and red splotch in this image is the most active star-making galaxy in the very distant universe. Image credit: NASA/JPL-Caltech/Subaru/STScI
›  Full image and caption
Astronomers have uncovered an extreme stellar machine -- a galaxy in the very remote universe pumping out stars at a surprising rate of up to 4,000 per year. In comparison, our own Milky Way galaxy turns out an average of just 10 stars per year.

The discovery, made possible by several telescopes including NASA's Spitzer Space Telescope, goes against the most common theory of galaxy formation. According to the theory, called the Hierarchical Model, galaxies slowly bulk up their stars over time by absorbing tiny pieces of galaxies -- and not in one big burst as observed in the newfound "Baby Boom" galaxy.

"This galaxy is undergoing a major baby boom, producing most of its stars all at once," said Peter Capak of NASA's Spitzer Science Center at the California Institute of Technology, Pasadena. "If our human population was produced in a similar boom, then almost all of the people alive today would be the same age." Capak is lead author of a new report detailing the discovery in the July 10th issue of Astrophysical Journal Letters.

The Baby Boom galaxy, which belongs to a class of galaxies called starbursts, is the new record holder for the brightest starburst galaxy in the very distant universe, with brightness being a measure of its extreme star-formation rate. It was discovered and characterized using a suite of telescopes operating at different wavelengths. NASA's Hubble Space Telescope and Japan's Subaru Telescope, atop Mauna Kea in Hawaii, first spotted the galaxy in visible-light images, where it appeared as an inconspicuous smudge due to is great distance. 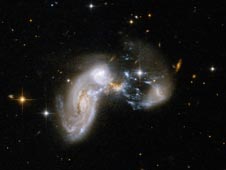 This galaxy, called Zw II 96, loosely resembles the most active star-forming galaxy in the distant universe.
›  Full image and caption It wasn't until Spitzer and the James Clerk Maxwell Telescope, also on Mauna Kea in Hawaii, observed the galaxy at infrared and submillimeter wavelengths, respectively, that the galaxy stood out as the brightest of the bunch. This is because it has a huge number of youthful stars. When stars are born, they shine with a lot of ultraviolet light and produce a lot of dust. The dust absorbs the ultraviolet light but, like a car sitting in the sun, it warms up and re-emits light at infrared and submillimeter wavelengths, making the galaxy unusually bright to Spitzer and the James Clerk Maxwell Telescope.

To learn more about this galaxy's unique youthful glow, Capak and his team followed up with a number of telescopes. They used optical measurements from Keck to determine the exact distance to the galaxy -- a whopping12.3 billion light-years. That's looking back to a time when the universe was 1.3 billion years old (the universe is approximately 13.7 billion years old today).

"If the universe was a human reaching retirement age, it would have been about 6 years old at the time we are seeing this galaxy," said Capak.

The astronomers made measurements at radio wavelengths with the National Science Foundation's Very Large Array in New Mexico. Together with Spitzer and James Clerk Maxwell data, these observations allowed the astronomers to calculate a star-forming rate of about 1,000 to 4,000 stars per year. At that rate, the galaxy needs only 50 million years, not very long on cosmic timescales, to grow into a galaxy equivalent to the most massive ones we see today.

While galaxies in our nearby universe can produce stars at similarly high rates, the farthest one known before now was about 11.7 billion light-years away, or a time when the universe was 1.9 billion years old.

"Before now, we had only seen galaxies form stars like this in the teenaged universe, but this galaxy is forming when the universe was only a child," said Capak. "The question now is whether the majority of the very most massive galaxies form very early in the universe like the Baby Boom galaxy, or whether this is an exceptional case. Answering this question will help us determine to what degree the Hierarchical Model of galaxy formation still holds true."

"The incredible star-formation activity we have observed suggests that we may be witnessing, for the first time, the formation of one of the most massive elliptical galaxies in the universe," said co-author Nick Scoville of Caltech, the principal investigator of the Cosmic Evolution Survey, also known as Cosmos. The Cosmos program is an extensive survey of a large patch of distant galaxies across the full spectrum of light.

"The immediate identification of this galaxy with its extraordinary properties would not have been possible without the full range of observations in this survey," said Scoville.