Spitzer Captures Stellar Coming of Age in our Galaxy 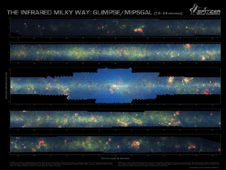 More than 800,000 frames from NASA's Spitzer Space Telescope were stitched together to create this infrared portrait of dust and stars radiating in the inner Milky Way. Image credit: NASA/JPL-Caltech/Univ. of Wisconsin
›  Full image and caption
›  Related image
More than 800,000 snapshots from NASA's Spitzer Space Telescope have been stitched together to create a new "coming of age" portrait of stars in our inner Milky Way galaxy.

The image, which depicts an area of sky 120 degrees wide by two degrees tall, can be viewed at http://www.nasa.gov/mission_pages/spitzer/multimedia/20080603.html. It was unveiled today at the 212th meeting of the American Astronomical Society in St. Louis, Mo.

"This is the highest-resolution, largest, most sensitive infrared picture ever taken of our Milky Way," said Sean Carey of NASA's Spitzer Science Center at the California Institute of Technology, Pasadena, Calif. Carey is lead investigator for one of two teams responsible for the new picture. "Where previous surveys saw a single source of light, we now see a cluster of stars. With this data, we can learn how massive stars form, map galactic spiral arms and make a better estimate of our galaxy's star-formation rate," Carey explained.

"I suspect that Spitzer's view of the galaxy is the best that we'll have for the foreseeable future. There is currently no mission planned that has both a wide field of view and the sensitivity needed to probe the Milky Way at these infrared wavelengths," said Barbara Whitney of the Space Science Institute, Madison, Wis. Whitney is a member of the second astronomy team.

Because Earth sits inside our dusty, flat, disk-shaped Milky Way, we have an edge-on view of our galactic home. We see the Milky Way as a blurry, narrow band of light that stretches almost completely across the sky. With Spitzer's dust-piercing infrared eyes, astronomers peered 60,000 light-years away into this fuzzy band, called the galactic plane, and saw all the way to the other side of the galaxy.

The result is a cosmic tapestry depicting an epic coming-of-age tale for stars. Areas hosting stellar embryos are identified by swaths of green, which are organic molecules, called polycyclic aromatic hydrocarbons, illuminated by light from nearby newborn stars. On Earth, these molecules are found in automobile exhaust and charred barbeque grills, essentially anywhere carbon molecules are burned incompletely.

The regions where young stars reside are revealed as "bubbles," or curved ridges in the green clouds. These bubbles are carved by the winds from young starlets blowing away their natal dust. The starlets appear as yellow and red dots, and the wisps of red that fill most bubbles are composed of graphite dust particles, similar to very small pieces of pencil lead.

Blue specks sprinkled throughout the photograph are individual older Milky Way stars. The bluish-white haze that hovers heavily in the middle two panels is starlight from the galaxy's older stellar population. A deep, careful examination of the image also shows the dusty remnants of dying and dead stars as translucent orange spheres.

"With these Spitzer data, we've been able to catalogue more than 100 million stars," said Edward Churchwell of the University of Wisconsin, at Madison. Churchwell is principal investigator of one of the teams.

"This picture shows us that our Milky Way galaxy is a crowded and dynamic place. We have a lot to learn. I've definitely found a lot of things in this map that I didn't expect to see," said Carey.