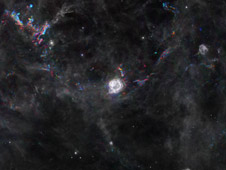 This image shows the remnant of a star that exploded, called Cassiopeia A (center) and its surrounding "light echoes." Image credit: NASA/JPL-Caltech
›  Full image and caption | ›  Related image
Astronomers have unearthed secrets from the grave of a star that blasted apart in a supernova explosion long ago. By decoding ghostly echoes of light traveling away from the remains of a supernova called Cassiopeia A, the scientists have pieced together what the star looked like in life, and ultimately how it met its demise.

The discovery, made using primarily NASA's Spitzer Space Telescope and Japan's Subaru telescope on Mauna Kea in Hawaii, represents the first time astronomers have been able to resurrect the life history of a supernova remnant in our own galaxy.

"Cassiopeia A lies in our cosmic backyard and offers the sharpest view of what is left hundreds of years after a supernova explosion," said Oliver Krause of the Max Planck Institute for Astronomy in Germany, lead author of a paper about the discovery appearing in this week's Science. "The echoes of light we found around Cassiopeia A provide us with a time machine to go back and see its past."

Cassiopeia A is one of the most explored objects in our sky and the subject of more than 1,000 scientific papers. It is the burnt-out corpse of a massive star that ended its life in a fiery supernova about 11,300 years ago. In fact, until recently, it was the youngest supernova remnant in our Milky Way galaxy (the new record holder, G1.9+0.3, was recently discovered using NASA's Chandra X-ray Observatory and other ground-based telescopes). Because Cassiopeia A is 11,000 light-years from Earth, the light from its explosion would have reached Earth, sweeping right past it, about 300 years ago. 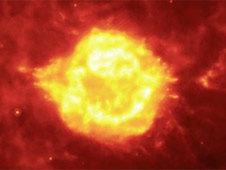 In this animation, a seething cauldron of light appears to bubble and ooze around the remains of a giant star. Credit: NASA/JPL-Caltech/MPIA
›  Go to animation Astronomers had thought this supernova light was never to be seen again, until 2005, when Krause and his colleagues discovered hints of it still bouncing around clouds surrounding the remnant (http://www.spitzer.caltech.edu/Media/releases/ssc2005-14/index.shtml ). Using Spitzer's infrared eyes, they found so-called infrared echoes, which occur when a flash of light from the supernova blasts through clouds, heating them up and causing them to glow in infrared. As the light rolls outward, the infrared echoes continue to flare up and travel away from the star (see new movie of this effect at http://www.nasa.gov/mission_pages/spitzer/multimedia/20080529-anim.html).

In the new study, the astronomers used Cassiopeia A's infrared echoes to hone in on faint visible-light echoes with Subaru and other ground-based telescopes. Visible-light echoes, known simply as light echoes, occur when visible light from the supernova scatters off dust. Unlike infrared echoes, they are direct signals from the graves of exploded stars, bearing all the information about the nature of the original blast.

Next, the astronomers had to act quickly because these echoes can fade within weeks. They used Subaru's spectrometer instrument to break the light apart and reveal signatures of atoms present when Cassiopeia A exploded. The resulting spectrum of light revealed hydrogen and helium -- telltale signs that Cassiopeia A was once a huge red supergiant star whose core collapsed in a rare supernova referred to as Type IIb. Previously, scientists did not know the supernova class to which Cassiopeia A belonged.

"This is an exciting result," said Alex Filippenko of the University of California, Berkeley, a supernova expert not affiliated with the study. "Cassiopeia A has been studied extensively with many telescopes over a wide range of wavelengths. It is gratifying that we finally know what kind of star exploded so long ago."

The findings also offer insight into another mystery shrouding Cassiopeia A. When Cassiopeia A's original star erupted, the event should have been widely witnessed on Earth as a bright star lighting up the sky. The most likely possible sighting is by the Astronomer Royal John Flamsteed in 1680, but he made just one observation of a dim star. The fact that almost no one saw the event is a classic problem in supernova lore.

Now that astronomers have learned how Cassiopeia A was forged, they think they might know why its death went unnoticed. "Type IIb supernovas fade quickly," said co-author George Rieke of the University of Arizona in Tucson. "This, plus a few cloudy nights, might explain the historical enigma around Cassiopeia A."

Recently, astronomers using Chandra, ESA's XMM-Newton Observatory and the Gemini Observatory in Chile, were able to use light echoes to identify the origins of a supernova outside our galaxy. That study, together with the new one, demonstrates the power of light echoes for conjuring up the "ghosts" of long-dead stars.

Other co-authors include Stephan Birkmann and Miwa Goto of the Max Planck Institute for Astronomy; Tomonori Usuda and Takashi Hattori of the National Astronomical Observatory of Japan in Hawaii; and Karl Misselt of the University of Arizona. NASA's Jet Propulsion Laboratory, Pasadena, Calif., manages the Spitzer Space Telescope mission for NASA's Science Mission Directorate, Washington. Science operations are conducted at the California Institute of Technology, also in Pasadena. For more information about Spitzer, visit http://www.spitzer.caltech.edu/spitzer and http://www.nasa.gov/spitzer . For more information about Subaru, operated by the National Astronomical Observatory of Japan, visit http://subarutelescope.org .