Embryonic Star Captured With Jets Flaring
A developing star wrapped in a black cocoon of dust is seen sprouting giant jets in a new image from NASA's Spitzer Space Telescope.

The stellar portrait, captured in infrared light, offers the first glimpse at a very early stage in the life of an embryonic sun-like star -- a time when the star's natal envelope is beginning to flatten and collapse, and streams of gas are escaping. The observations will ultimately help astronomers better understand how stars and their planets form. 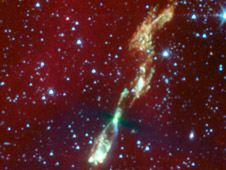 Image right: A rare, infrared view of a developing star and its flaring jets taken by NASA's Spitzer Space Telescope shows us what our own solar system might have looked like billions of years ago. Image credit: NASA/JPL-Caltech/UIUC
+ Full image and caption
+ Related animation

"This is the first time we've clearly seen a flattened envelope around a forming star," said Leslie Looney of the University of Illinois at Urbana-Champaign, lead author of a study about the star, called L1157, appearing Dec. 1 in Astrophysical Journal Letters. "Some theories had predicted that envelopes flatten as they collapse onto their stars and surrounding planet-forming disks, but we hadn't seen any strong evidence of this until now."

The Spitzer image is online at: http://www.nasa.gov/mission_pages/spitzer/multimedia/spitzer20071129.html .

Stars are born out of thick clouds, or envelopes, of gas and dust that condense and collapse inward. As a star grows and feeds off the envelope, it spins faster and faster like a twirling ice skater. A disk of planet-forming material begins to take shape in orbit around the star, and jets of gas shoot up from above and below the disk to relieve the star's accumulating pressure. Eventually, the original envelope falls onto the spinning disk, and the jets slow to a stop. 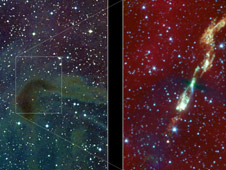 Image Left: A visible and infrared view of an area with a developing star. In visible light (left), the star and its surrounding regions are hidden. Image credit: NASA/JPL-Caltech/UIUC
+ Full image and caption


The regions where all the action takes place are dark and dusty, letting little visible light escape. For example, the embryonic star L1157 appears black in visible-light views. Spitzer's infrared view of the star, on the other hand, penetrates the dusty haze, giving us a rare look at what our own solar system might have looked like when it was very young.

The bipolar jets shooting away from L1157 are enormous; light itself would take about nine months to travel the length of one jet. The color white shows the hottest parts of the jets, with temperatures around 100 degrees Celsius (212 degrees Fahrenheit). Most of the material in the jets, seen in orange, is roughly zero degrees on the Celsius and Fahrenheit scales.

The flattened envelope around the fledgling star is perpendicular to the jets and appears deep black. This is because it is so thick with dust that even infrared light cannot escape. The envelope is big enough to engulf the equivalent of tens of thousands of mature solar systems similar to our own, while the planet-forming disk tucked inside cannot be seen in this photo – it is smaller than a pixel.

L1157 is located about 800 light-years away in the constellation Cepheus. It is roughly 10,000 years old, and, according to astronomers' estimates, will ignite to become a full-fledged star about the mass of our sun in a million years or so.

"Taking baby pictures of stars is not easy to do," said Looney. "Now that we have a good picture, we can begin to ask questions about whether this star system and its potential planets will grow up to become like ours."