Youthful Star Sprouts Planets Early
A stellar prodigy has been spotted about 450 light-years away in a system called UX Tau A by NASA's Spitzer Space Telescope. Astronomers suspect this system's central sun-like star, which is just one million years old, may already be surrounded by young planets. Scientists hope the finding will provide insight into when planets began to form in our own solar system.

"This result is exciting because we see a gap, potentially carved out by planets, around a dusty sun-like star. In almost all other star systems of this age, we typically see a primordial disk – a thick disk of dust, without any clearings, " said Catherine Espaillat, a graduate student at the University of Michigan, Ann Arbor. 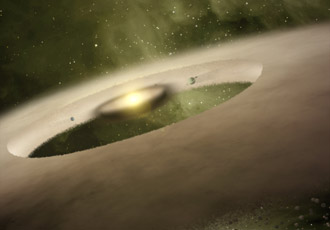 Prior to the Spitzer observations, Espaillat and her teammates knew that a sun-like star sat at the center of UX Tau A. Now, using the telescope's infrared spectrometer instrument, they have discerned details about the dusty disk swirling around the central star.

Such dusty disks are where planets are thought to be born. Dust grains clump together like snowballs to form larger rocks, and then the bigger rocks collide to form the cores of planets. When rocks revolve around their central star, they act like cosmic vacuum cleaners, picking up all the gas and dust in their path and creating gaps.

Spitzer saw a gap in UX Tau A's disk that extends from 0.2 to 56 astronomical units (an astronomical unit is the distance between the sun and Earth). In our solar system, this gap would roughly extend between Mercury and Pluto. Espaillat notes that the formation of one or more planets could be responsible for carving out the gap.

Although gaps have been detected in disks swirling around young stars before, Espaillat notes that UX Tau A is special because the gap is sandwiched between two thick disks of dust. An inner thick dusty disk hugs the central star, then, moving outward, there is a gap, followed by another thick doughnut-shaped disk. Other systems with gaps contain very little to no dust near the central star. In other words, those gaps are more like big holes in the centers of disks.

"This finding definitely affects the way astronomers look at planet formation. Spitzer's infrared spectrometer was able to see a gap in this system, but future, more sensitive telescopes maybe able to search for Earth-like planets in UX Tau A," said Espaillat.

Her paper will be published in the December 2007 issue of Astrophysical Journal Letters. Other authors on the paper include Nuria Calvet, Jesus Hernández and Lee Hartmann, also from the University of Michigan; Paola D’Alessio of the Universidad Nacional Autónoma de México, Michoacán; Chunhua Qi of the Harvard-Smithsonian Institute for Astrophysics, Cambridge, Mass.; Elise Furlan of the NASA Astrobiology Institute at the University of California at Los Angeles; and Dan Watson of the University of Rochester, N.Y.

Previous results from Calvet and Watson are online at http://www.spitzer.caltech.edu/features/articles/20050912.shtml .

Written by Linda Vu
› Back To Top