Astronomers Say Moons Like Ours Are Uncommon
The next time you take a moonlit stroll, or admire a full, bright-white moon looming in the night sky, you might count yourself lucky. New observations from NASA's Spitzer Space Telescope suggest that moons like Earth's - that formed out of tremendous collisions - are uncommon in the universe, arising at most in only 5 to 10 percent of planetary systems.

"When a moon forms from a violent collision, dust should be blasted everywhere," said Nadya Gorlova of the University of Florida, Gainesville, lead author of a new study appearing Nov. 20 in the Astrophysical Journal. "If there were lots of moons forming, we would have seen dust around lots of stars - but we didn't." 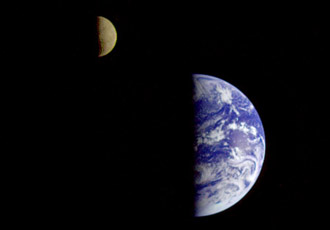 Image right: Our Earth-moon system, photographed here by NASA's Galileo spacecraft in 1992, might be somewhat uncommon in the universe. New evidence from NASA's Spitzer Space Telescope suggests that moons that formed like ours - out of colossal collisions between rocky bodies - might arise in, at most, 5 to 10 percent of planetary systems. Image credit: NASA/JPL/Caltech
+ Larger view

It's hard to imagine Earth without a moon. Our familiar white orb has long been the subject of art, myth and poetry. Wolves howl at it, and humans have left footprints in its soil. Life itself might have evolved from the ocean to land thanks to tides induced by the moon's gravity.

Scientists believe the moon arose about 30 to 50 million years after our sun was born, and after our rocky planets had begun to take shape. A body as big as Mars is thought to have smacked into our infant Earth, breaking off a piece of its mantle. Some of the resulting debris fell into orbit around Earth, eventually coalescing into the moon we see today. The other moons in our solar system either formed simultaneously with their planet or were captured by their planet's gravity.

Gorlova and her colleagues looked for the dusty signs of similar smash-ups around 400 stars that are all about 30 million years old - roughly the age of our sun when Earth's moon formed. They found that only 1 out of the 400 stars is immersed in the telltale dust. Taking into consideration the amount of time the dust should stick around, and the age range at which moon-forming collisions can occur, the scientists then calculated the probability of a solar system making a moon like Earth's to be at most 5 to 10 percent.

"We don't know that the collision we witnessed around the one star is definitely going to produce a moon, so moon-forming events could be much less frequent than our calculation suggests," said George Rieke of the University of Arizona, Tucson, a co-author of the study. 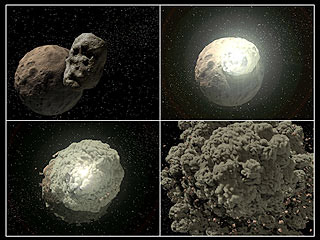 Image left: This artist's animation shows bodies as big as mountain ranges smashing together. Such collisions form the basis of the planet-building process. An even bigger collision between Earth and a body the size of Mars is thought to have created our moon.Image credit: NASA/JPL/Caltech
+ Play animation (Quicktime - 833Kb)
+ High resolution formats

In addition, the observations tell astronomers that the planet-building process itself winds down by 30 million years after a star is born. Like our moon, rocky planets are built up through messy collisions that spray dust all around. Current thinking holds that this process lasts from about 10 to 50 million years after a star forms. The fact that Gorlova and her team found only 1 star out of 400 with collision-generated dust indicates that the 30-million-year-old stars in the study have, for the most part, finished making their planets.

"Astronomers have observed young stars with dust swirling around them for more than 20 years now," said Gorlova. "But those stars are usually so young that their dust could be left over from the planet-formation process. The star we have found is older, at the same age our sun was when it had finished making planets and the Earth-moon system had just formed in a collision."

For moon lovers, the news isn't all bad. For one thing, moons can form in different ways. And, even though the majority of rocky planets in the universe might not have moons like Earth's, astronomers believe there are billions of rocky planets out there. Five to 10 percent of billions is still a lot of moons.

Other authors of the paper include: Zoltan Balog, James Muzerolle, Kate Y. L. Su and Erick T. Young of the University of Arizona, and Valentin D. Ivanov of the European Southern Observatory, Chile.