Scientists have discovered a huge belt of warm dust - enough to build a Mars-size planet or larger - swirling around a distant star that is just slightly more massive than our sun. The dust belt, which they suspect is clumping together into planets, is located in the middle of the system's terrestrial habitable zone. This is the region around a star where liquid water could exist on any rocky planets that might form. Earth is located in the middle of our sun's terrestrial habitable zone. 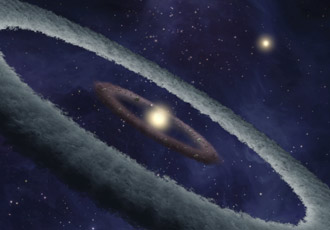 Image right: This artist's conception shows a binary-star, or two-star, system, called HD 113766, where astronomers suspect a rocky Earth-like planet is forming around one of the stars. Image credit: NASA/JPL-Caltech
+ Full image and caption

At approximately 10 million years old, the star is also at just the right age for forming rocky planets.

"The timing for this system to be building an Earth is very good," said Carey Lisse, of the Johns Hopkins University Applied Physics Laboratory, Baltimore, Md. "If the system was too young, its planet-forming disk would be full of gas, and it would be making gas-giant planets like Jupiter instead. If the system was too old, then dust aggregation or clumping would have already occurred and all the system's rocky planets would have already formed."

According to Lisse, the conditions for forming an Earth-like planet are more than just being in the right place at the right time and around the right star - it's also about the right mix of dusty materials.

Using Spitzer's infrared spectrometer instrument, he determined that the material in HD 113866 is more processed than the snowball-like stuff that makes up infant solar systems and comets, which are considered cosmic "refrigerators" because they contain pristine ingredients from the early solar system. However, it is also not as processed as the stuff found in mature planets and asteroids. This means the dust belt must be in a transitional phase, when rocky planets are just beginning to form.

How do scientists know the material is more processed than that of comets? From missions like NASA's Deep Impact - where an 820-pound impactor spacecraft collided with Comet Tempel 1 - scientists know that early star systems contain a lot of fragile organic material. That material includes water ice, carbonates and polycyclic aromatic hydrocarbons, which are carbon-based molecules found on charred barbeque grills and automobile exhaust on Earth. Lisse says that HD 113766 does not contain any water ice, carbonates, or fragile organic materials.

From meteorite studies on Earth, scientists also have a good idea of what makes up asteroids - the more processed rocky leftovers of planet formation. These studies tell us that metals began separating from rocks in Earth's early days, when the planet's body was completely molten. During this time, almost all the heavy metals fell to Earth's center in a process called "differentiation." Lisse says that, unlike planets and asteroids, the metals in HD 113766 have not totally separated from the rocky material, suggesting that rocky planets have not yet formed.

"The material mix in this belt is most reminiscent of the stuff found in lava flows on Earth. I thought of Mauna Kea material when I first saw the dust composition in this system - it contains raw rock and is abundant in iron sulfides, which are similar to fool's gold," said Lisse. Mauna Kea is a well-known volcano in Hawaii.

"It is fantastic to think we are able to detect the process of terrestrial planet formation. Stay tuned - I expect lots more fireworks as the planet in HD113766 grows," he adds.

Lisse's paper has been accepted and will be published in an upcoming issue of Astrophysical Journal.

The University of Maryland is responsible for overall Deep Impact mission science, and project management is handled by the Jet propulsion Laboratory.