Planets with Four Parents? Spitzer Shows it's Possible
How many stars does it take to "raise" a planet? In our own solar system, it took only one – our sun. However, new research from NASA's Spitzer Space Telescope shows that planets might sometimes form in systems with as many as four stars.

Astronomers used Spitzer's infrared vision to study a dusty disk that swirls around a pair of stars in the quadruple-star system HD 98800. Such disks are thought to give rise to planets. Instead of a smooth, continuous disk, the telescope detected gaps that could be caused by a unique gravitational relationship between the system's four stars. Alternatively, the gaps could indicate planets have already begun to form, carving out lanes in the dust. 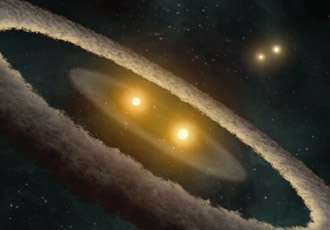 "Planets are like cosmic vacuums. They clear up all the dirt that is in their path around the central stars," said Elise Furlan, of the NASA Astrobiology Institute at the University of California at Los Angeles. Furlan is the lead author of a paper that has been accepted for publication in The Astrophysical Journal.

HD 988000 is approximately 10-million years old, and is located 150 light-years away in the constellation TW Hydrae.

Before Spitzer set its gaze on HD 98800, astronomers had a rough idea of the system's structure from observations with ground-based telescopes. They knew the system contains four stars, and that the stars are paired off into doublets, or binaries. The stars in the binary pairs orbit around each other, and the two pairs also circle each other like choreographed ballerinas. One of the stellar pairs, called HD 98800B, has a disk of dust around it, while the other pair has none.

Although the four stars are gravitationally bound, the distance separating the two binary pairs is about 50 astronomical units (AU) -- slightly more than the average distance between our sun and Pluto. Until now, technological limitations have hindered astronomers' efforts to look at the dusty disk around HD 98800B more closely.

With Spitzer, scientists finally have a detailed view. Using the telescope's infrared spectrometer, Furlan's team sensed the presence of two belts in the disk made of large dust grains. One belt sits at approximately 5.9 AU away from the central binary, HD 98800B, or about the distance from the sun to Jupiter. This belt is likely made up of asteroids or comets. The other belt sits at 1.5 to 2 AU, comparable to the area where Mars and the asteroid belt sit, and probably consists of fine grains.

"Typically, when astronomers see gaps like this in a debris disk, they suspect that a planet has cleared the path. However, given the presence of the diskless pair of stars sitting 50 AU away, the inward-migrating dust particles are likely subject to complex, time-varying forces, so at this point the existence of a planet is just speculation," said Furlan.

Astronomers believe that planets form like snowballs over millions of years, as small dust grains clump together to form larger bodies. Some of these cosmic rocks then smash together to form rocky planets, like Earth, or the cores of gas-giant planets like Jupiter. Large rocks that don't form planets often become asteroids and comets. As these rocky structures violently collide, bits of dust are released into space. Scientists can see these dust grains with Spitzer's supersensitive infrared eyes.

According to Furlan, the dust generated from the collision of rocky objects in the outer belt should eventually migrate toward the inner disk. However, in the case of HD 98800B, the dust particles do not evenly fill out the inner disk as expected, due to either planets or the diskless binary pair sitting 50 AU away and gravitationally influencing the movement of dust particles.

"Since many young stars form in multiple systems, we have to realize that the evolution of disks around them and the possible formation of planetary systems can be way more complicated and perturbed than in a simple case like our solar system," Furlan added.

Multiple-star planets would also have interesting sunsets. For more information about planets with double and triple sunsets, see: http://www.nasa.gov/mission_pages/spitzer/news/spitzer-20070329.html