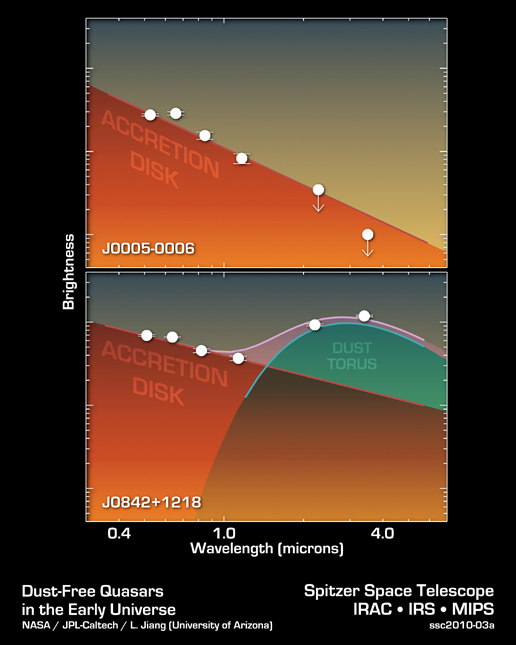 These two data plots from NASA's Spitzer Space Telescope show a primitive supermassive black hole (top) compared to a typical one. As the data show, the typical supermassive black hole, called J0842+1218, exhibits the signs of a surrounding ring of dust, a feature that appears at longer wavelengths of infrared light. The primitive object, called J0005-0006, lacks a dusty torus.

These Spitzer data, along with other observations not shown here, led to the discovery of the two most primitive supermassive black holes known, J0005-0006 and J0303-0019. Both objects are about 13 billion light-years away.

Usually, a supermassive black hole is surrounded by an accretion disk, which itself is surrounded by a dark doughnut-like dusty structure called a dust torus. But for the primitive black holes, the dust tori are missing and only gas disks are observed. This is because the early universe was clean as a whistle. Enough time had not passed for molecules to clump together into dust particles. Some black holes forming during this era thus started out lacking dust. As they grew, gobbling up more and more mass, they are thought to have accumulated dusty rings.