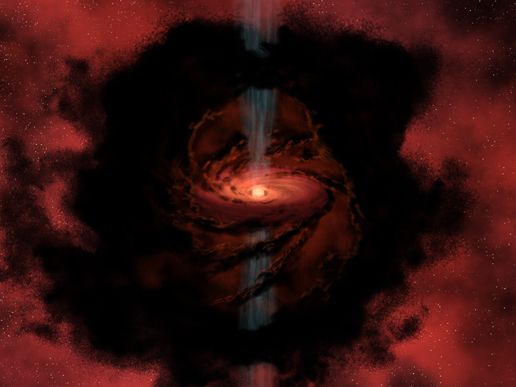 This artist's rendering gives us a glimpse into a cosmic nursery as a star is born from the dark, swirling dust and gas of this cloud. Stars form when dark dust from the cloud begins to clump together under the influence of its own gravity. The infalling material forms a disk as it spirals inward, which feeds material onto the forming star at its center. Jets of material that shoot from the inner disk and protostar herald its birth.

Planets form out of the remnants of the disk of material that surrounds the infant star. This leads to a question that has long perplexed astronomers about the nature of brown dwarfs, objects that fall between planets and stars in terms of their temperature and mass.

Are brown dwarfs born like stars, as in this rendering, or do they form like planets orbiting another star? A study by researchers using data from NASA's Spitzer Space Telescope has led to the preliminary conclusion that they are formed much like the star you see here.