Bursting with Stars and Black Holes 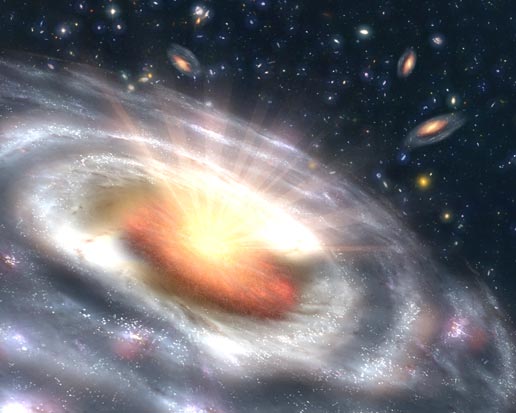 A growing black hole, called a quasar, can be seen at the center of a faraway galaxy in this artist's concept. Astronomers using NASA's Spitzer and Chandra space telescopes discovered swarms of similar quasars hiding in dusty galaxies in the distant universe.

The quasar is the orange object at the center of the large, irregular-shaped galaxy. It consists of a dusty, doughnut-shaped cloud of gas and dust that feeds a central supermassive black hole. As the black hole feeds, the gas and dust heat up and spray out X-rays, as illustrated by the white rays. Beyond the quasar, stars can be seen forming in clumps throughout the galaxy. Other similar galaxies hosting quasars are visible in the background.

The newfound quasars belong to a long-lost population that had been theorized to be buried inside dusty, distant galaxies, but were never actually seen. While some quasars are easy to detect because they are oriented in such a way that their X-rays point toward Earth, others are oriented with their surrounding doughnut-clouds blocking the X-rays from our point of view. In addition, dust and gas in the galaxy itself can block the X-rays.

Astronomers had observed the most energetic of this dusty, or obscured, bunch before, but the "masses," or more typical members of the population, remained missing. Using data from Spitzer and Chandra, the scientists uncovered many of these lost quasars in the bellies of massive galaxies between 9 and 11 billion light-years away. Because the galaxies were also busy making stars, the scientists now believe most massive galaxies spent their adolescence building up their stars and black holes simultaneously.

The Spitzer observations were made as part of the Great Observatories Origins Deep Survey program, which aims to image the faintest distant galaxies using a variety of wavelengths.