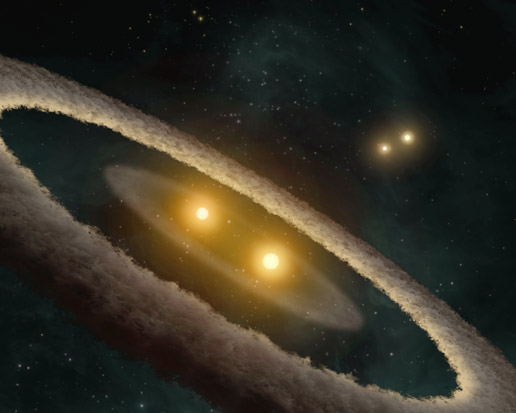 How many stars does it take to "raise" a planet? In our own solar system, it took only one -- our sun. However, new research from NASA's Spitzer Space Telescope shows that planets might be forming in systems with as many as four stars.

This artist's concept illustrates one such quadruple-star system, called HD 98800. The system is still relatively young, at 10 million years old. One of its two pairs of stars is known to be circled by a dusty disk, which contains materials that are thought to clump together to form planets. When Spitzer set its infrared gaze on the disk, it detected gaps. How did the gaps get there? One possible answer is that planets are growing in size and carving out lanes in the dust.

HD 98800 is located 150 light-years away in the constellation TW Hydrae.

+ More detailed description
›Back To Top