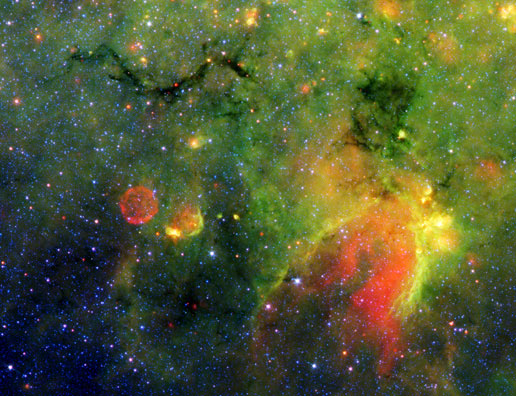 This infrared image from NASA's Spitzer Space Telescope shows what astronomers are referring to as a "snake" (upper left) and its surrounding stormy environment. The sinuous object is actually the core of a thick, sooty cloud large enough to swallow dozens of solar systems. In fact, astronomers say the "snake's belly" may be harboring beastly stars in the process of forming.

The galactic creepy crawler to the right of the snake is another thick cloud core, in which additional burgeoning massive stars might be lurking. The colorful regions below the two cloud cores are less dense cloud material, in which dust has been heated by starlight and glows with infrared light. Yellow and orange dots throughout the image are monstrous developing stars; the red star on the "belly" of the snake is 20 to 50 times as massive as our sun. The blue dots are foreground stars.

The red ball at the bottom left is a "supernova remnant," the remains of massive star that died in a fiery blast. Astronomers speculate that radiation and winds from the star before it died, in addition to a shock wave created when it exploded, might have played a role in creating the snake.

Spitzer was able to spot the two black cloud cores using its heat-seeking infrared vision. The objects are hiding in the dusty plane of our Milky Way galaxy, invisible to optical telescopes. Because their heat, or infrared light, can sneak through the dust, they first showed up in infrared images from past missions. The cloud cores are so thick with dust that if you were to somehow transport yourself into the middle of them, you would see nothing but black, not even a star in the sky. Now, that's spooky!

Spitzer's new view of the region provides the best look yet at the massive embryonic stars hiding inside the snake. Astronomers say these observations will ultimately help them better understand how massive stars form. By studying the clustering and range of masses of the stellar embryos, they hope to determine if the stars were born in the same way that our low-mass sun was formed -- out of a collapsing cloud of gas and dust -- or by another mechanism in which the environment plays a larger role.

The snake is located about 11,000 light-years away in the constellation Sagittarius.