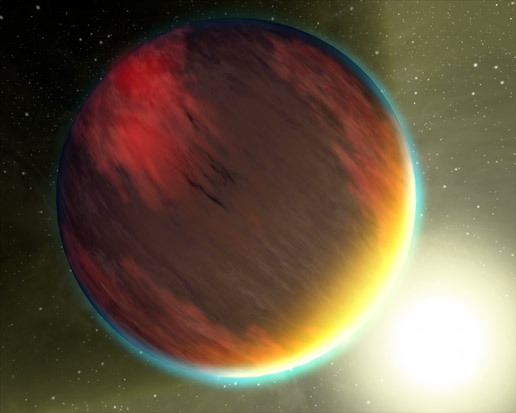 The basic chemistry for life has been detected in a second hot gas planet, HD 209458b, depicted in this artist's concept. Two of NASA's Great Observatories – the Hubble Space Telescope and Spitzer Space Telescope, yielded spectral observations that revealed molecules of carbon dioxide, methane and water vapor in the planet's atmosphere. HD 209458b, bigger than Jupiter, occupies a tight, 3.5-day orbit around a sun-like star about 150 light years away in the constellation Pegasus. Planets like this one, which circle stars beyond our sun, are called exoplanets.

The new finding follows the detection of these same organic molecules in the atmosphere of another hot, giant planet, called HD 189733b, by astronomers using Hubble and Spitzer data. Astronomers can now begin comparing the chemistry and dynamics of these two planets, and search for similar measurements of other candidate exoplanets, advancing toward the goal of being able to characterize planets where life could exist.

Neither of the two planets studied is habitable, but they display the same molecules that, if found around a rocky planet in the future, could potentially indicate the presence of life.

The new findings pave the way for future work that will help astronomers shortlist any promising rocky Earth-like planets where the signatures of organic chemicals might indicate the presence of life.