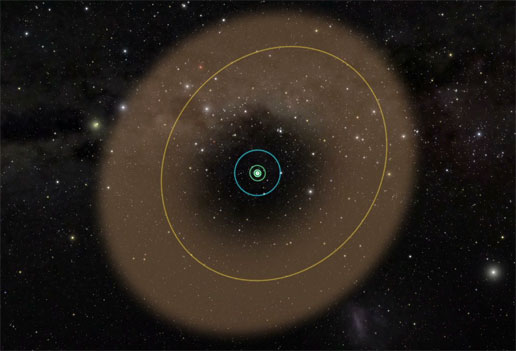 This video showcases the Saturnian system, beginning with the planet itself and panning out to its newest addition -- an enormous ring discovered in infrared light by NASA's Spitzer Space Telescope.

The view starts with a simulated view of Saturn. It then moves outward, showing the orbits of many of Saturn's inner moons in green. The white lines show outer moons with orbits of varying inclinations.

The yellow line shows the orbit of the moon Phoebe, which circles through the newfound ring, represented in tan. Both Phoebe and the outer ring orbit at an angle of 27 degrees from the main ring plane (they also orbit in the opposite direction of the other rings and most of the moons).

The movie then zooms back into the system to show the orbit of the moon Iapetus in blue. Astronomers think that material from the outer ring is migrating in toward Iapetus, splattering its leading hemisphere. This would explain the moon's strange half-black, half-white appearance, first noted by Giovanni Cassini in the late seventeenth century.

Elements of this animation are courtesy SCISS in Sweden, and American Museum of Natural History in New York, New York.