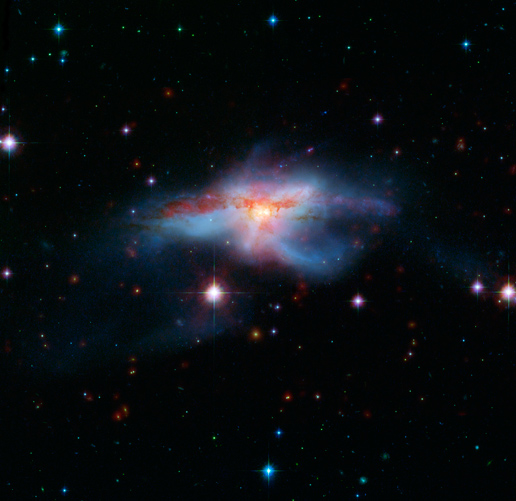 This image of a pair of colliding galaxies called NGC 6240 shows them in a rare, short-lived phase of their evolution just before they merge into a single, larger galaxy. The prolonged, violent collision has drastically altered the appearance of both galaxies and created huge amounts of heat -- turning NGC 6240 into an "infrared luminous" active galaxy.

A rich variety of active galaxies, with different shapes, luminosities and radiation profiles exist. These galaxies may be related -- astronomers have suspected that they may represent an evolutionary sequence. By catching different galaxies in different stages of merging, a story emerges as one type of active galaxy changes into another. NGC 6240 provides an important "missing link" in this process.

This image was created from combined data from the infrared array camera of NASA's Spitzer Space Telescope at 3.6 and 8.0 microns (red) and visible light from NASA's Hubble Space Telescope (green and blue).