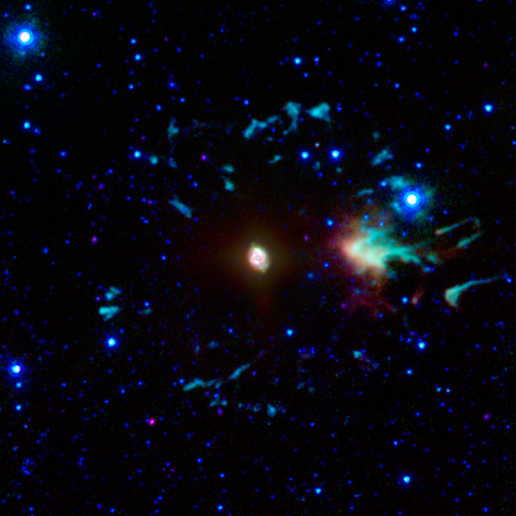 The "Cat’s Eye" nebula, or NGC 6543, is a well-studied example of a "planetary nebula." Such objects are the glowing remnants of dust and gas expelled from moderate-sized stars during their last stages of life. Our own sun will generate such a nebula in about five billion years.

NASA’s Spitzer Space Telescope has studied many such planetary nebulae in infrared light, including a variety of more distant ones, which have helped scientists identify a population of carbon-bearing stars near our galaxy's center.

The infrared emission from the Cat's Eye is generated by a variety of elements and molecules. The bright inner region of this nebula shows a complex structure reminiscent of a feline eye. Outside this compact region lies a series of other structures representing material that was ejected slightly earlier in the central star's life, when it was a giant star.

The image is a composite of data from Spitzer’s infrared array camera. Light with a wavelength of 3.6 microns is rendered as blue, 5.8 microns is displayed as green and 8.0 microns is represented in red. The brightness of the central area has been greatly reduced to make it possible to maintain its visibility while enhancing the brightness of the much fainter outer features. Overall colors have been enhanced to better show slight variations in hue.
Larger image (JPG 1 Mb)
› Back To Top