M81 Galaxy is Pretty in Pink 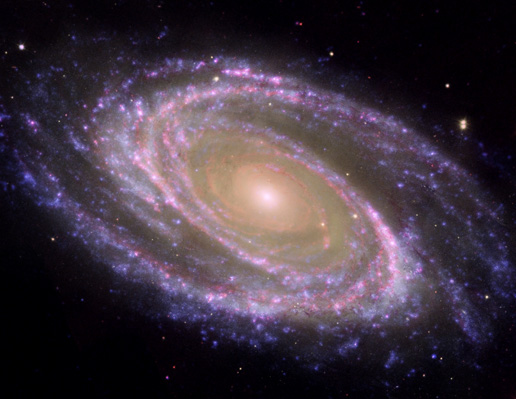 The perfectly picturesque spiral galaxy known as Messier 81, or M81, looks sharp in this new composite from NASA's Spitzer and Hubble space telescopes and NASA's Galaxy Evolution Explorer. M81 is a "grand design" spiral galaxy, which means its elegant arms curl all the way down into its center. It is located about 12 million light-years away in the Ursa Major constellation and is one of the brightest galaxies that can be seen from Earth through telescopes.

The colors in this picture represent a trio of light wavelengths: blue is ultraviolet light captured by the Galaxy Evolution Explorer; yellowish white is visible light seen by Hubble; and red is infrared light detected by Spitzer. The blue areas show the hottest, youngest stars, while the reddish-pink denotes lanes of dust that line the spiral arms. The orange center is made up of older stars.

+ High-resolution (JPEG 3Mb)
›Back To Top