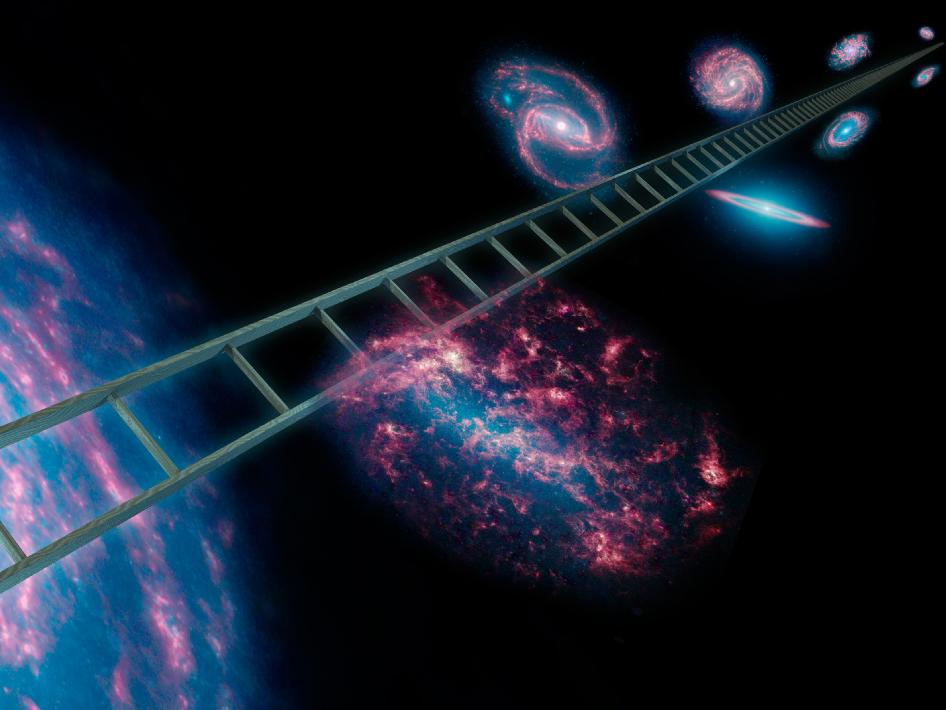 Astronomers using NASA’s Spitzer Space Telescope have greatly improved the cosmic distance ladder used to measure the expansion rate of the universe, as well as its size and age. The cosmic distance ladder, symbolically shown here in this artist's concept, is a series of stars and other objects within galaxies that have known distances. By combining these distance measurements with the speeds at which objects are moving away from us, scientists can calculate the expansion rate of the universe, also known as Hubble's constant.

Spitzer was able to improve upon past measurements of Hubble's constant due to its infrared vision, which sees through dust to provide better views of variable stars called Cepheids. These pulsating stars are vital "rungs" in the distance ladder.

Spitzer observed ten Cepheids in our own Milky Way galaxy and 80 in a nearby neighboring galaxy called the Large Magellanic Cloud. Without the cosmic dust blocking their view, the Spitzer research team was able to obtain more precise measurements of the stars' apparent brightness, and thus their distances.

The researchers were then able to tighten up the rungs on the cosmic distance ladder, better determining distances to other galaxies, and enabling a new and improved estimate of our universe's expansion rate.

The galaxies used in this composite artwork are all infrared images from Spitzer covering wavelengths of 3.6 microns (blue), 4.5 microns (green), and 8.0 microns (red).