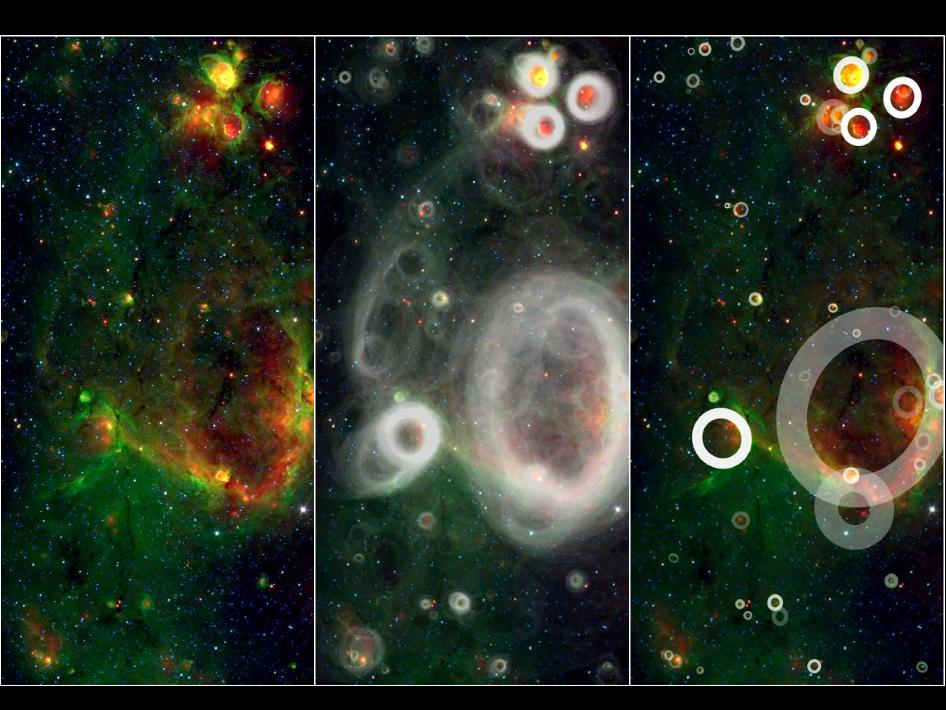 Finding Bubbles in the Milky Way

A team of volunteers from the general public has pored over observations from NASA's Spitzer Space Telescope and discovered more than 5,000 "bubbles" in the disk of our Milky Way galaxy. Young, hot stars blow the bubbles into surrounding gas and dust, highlighting areas of brand new star formation.

Upwards of 35,000 "citizen scientists" sifted through the Spitzer infrared data as part of the online Milky Way Project to find these telltale bubbles. The users have turned up 10 times as many bubbles as previous surveys so far.

Volunteers for the project are shown a small section of Spitzer’s huge infrared Milky Way image (left), which they then scan for cosmic bubbles. Using a sophisticated drawing tool, the volunteers trace the shape and thickness of the bubbles.

All the user drawings can be overlaid on top of one another to form a so-called “heat map” (middle). Features that have been identified repeatedly by many different users jump out, revealing the overall pattern of bubbles in this part of the galaxy.

At least five volunteers must flag a candidate bubble before it is included in the final catalog (right). The brightness of each bubble in the catalog is determined by its “hit rate,” or the fraction of users who traced it out. The faintest ones were identified by 10 percent of the users, while solid white indicates a hit rate of 50 percent or better.

After identifying all apparent bubbles, which can include wispy arcs of partially broken rings and the circles-within-circles of overlapping bubbles, volunteers get another of the 12,263 possible image sections to scrutinize. With so much sky to cover, it is clear why so many volunteers are needed to do this kind of science.