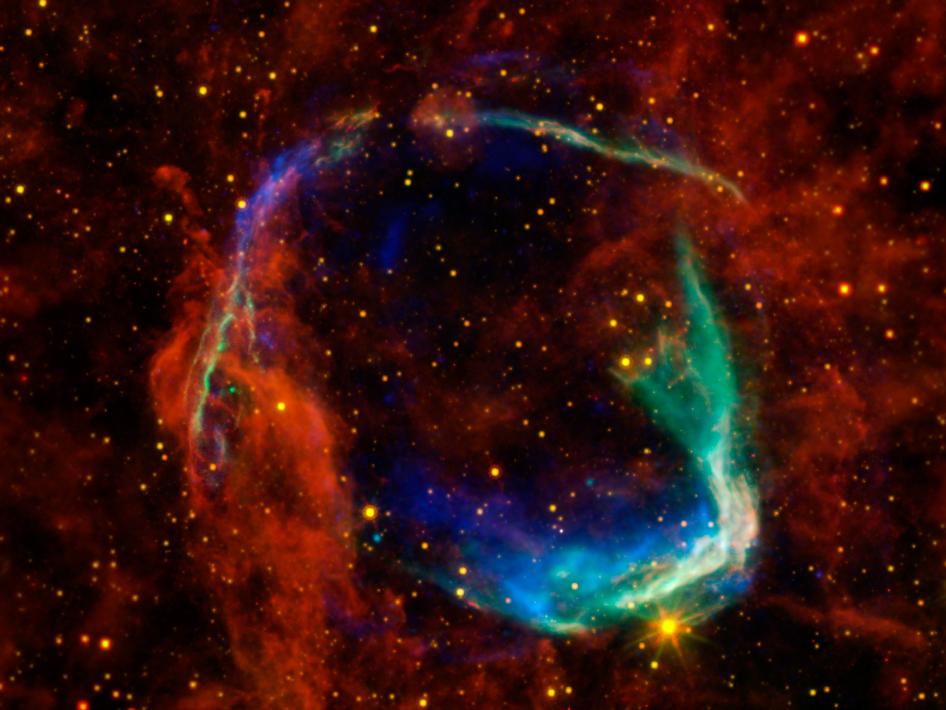 All Eyes on Oldest Recorded Supernova

This image combines data from four different space telescopes to create a multi-wavelength view of all that remains of the oldest documented example of a supernova, called RCW 86. The Chinese witnessed the event in 185 A.D., documenting a mysterious "guest star" that remained in the sky for eight months. X-ray images from the European Space Agency's XMM-Newton Observatory and NASA's Chandra X-ray Observatory are combined to form the blue and green colors in the image. The X-rays show the interstellar gas that has been heated to millions of degrees by the passage of the shock wave from the supernova.

Infrared data from NASA's Spitzer Space Telescope, as well as NASA's Wide-Field Infrared Survey Explorer (WISE) are shown in yellow and red, and reveal dust radiating at a temperature of several hundred degrees below zero, warm by comparison to normal dust in our Milky Way galaxy.

By studying the X-ray and infrared data together, astronomers were able to determine that the cause of the explosion witnessed nearly 2,000 years ago was a Type Ia supernova, in which an otherwise-stable white dwarf, or dead star, was pushed beyond the brink of stability when a companion star dumped material onto it. Furthermore, scientists used the data to solve another mystery surrounding the remnant -- how it got to be so large in such a short amount of time. By blowing a wind prior to exploding, the white dwarf was able to clear out a huge "cavity," a region of very low-density surrounding the system. The explosion into this cavity was able to expand much faster than it otherwise would have.

This is the first time that this type of cavity has been seen around a white dwarf system prior to explosion. Scientists say the results may have significant implications for theories of white-dwarf binary systems and Type Ia supernovae.

RCW 86 is approximately 8,000 light-years away. At about 85 light-years in diameter, it occupies a region of the sky in the southern constellation of Circinus that is slightly larger than the full moon.