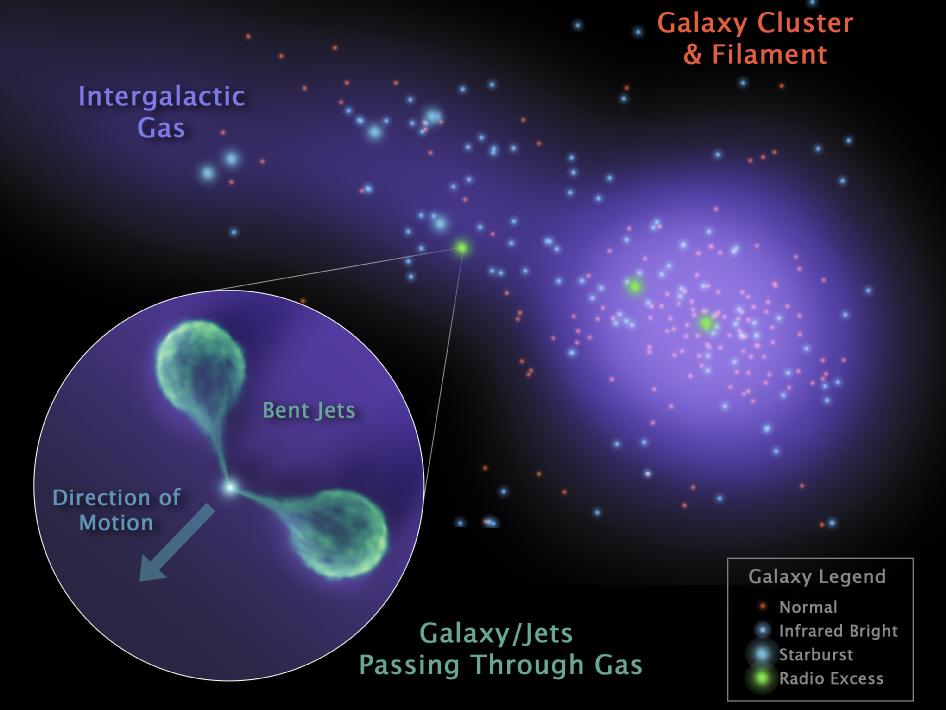 Astronomers have caught sight of an unusual galaxy that, like a lighthouse, has illuminated new details about a celestial "sandbar" connecting two massive islands of galaxies. The galaxy, which is wandering through this sandbar, or filament, has twin lobes of material jetting from its center that are bending backwards as they sweep through the filament's hot gas. The findings are a result of observations made primarily by NASA's Spitzer Space Telescopes and the Very Large Array radio telescope near Socorro, N.M.

In this diagram, one of the clusters is shown to the right as a collection of galaxies, which are seen as dots. The hot gas filling the cluster and filament is illustrated with purple. The unusual galaxy and the angle of its bent lobes are illustrated in the callout.

In 2008, Spitzer identified this filament, which runs from a galaxy cluster known as Abell 1763. Later, Spitzer data helped narrow in on the unusual galaxy, and led to follow-up radio observations that were that were used to find and measure the angles of the lobes. Astronomers measured the curve of these lobes to gauge the density of particles in the intergalactic filament. Such rare, arced galaxies could be used to find and study the hard-to-see intergalactic filaments that link up galaxy clusters and offer ideal environments for forming new stars.

Infrared-bright galaxies measured by Spitzer are represented in the diagram with blue colors, and the brightest "starburst" galaxies are the largest dots. Radio-bright galaxies, including the one sweeping through the filament, are shaded green.