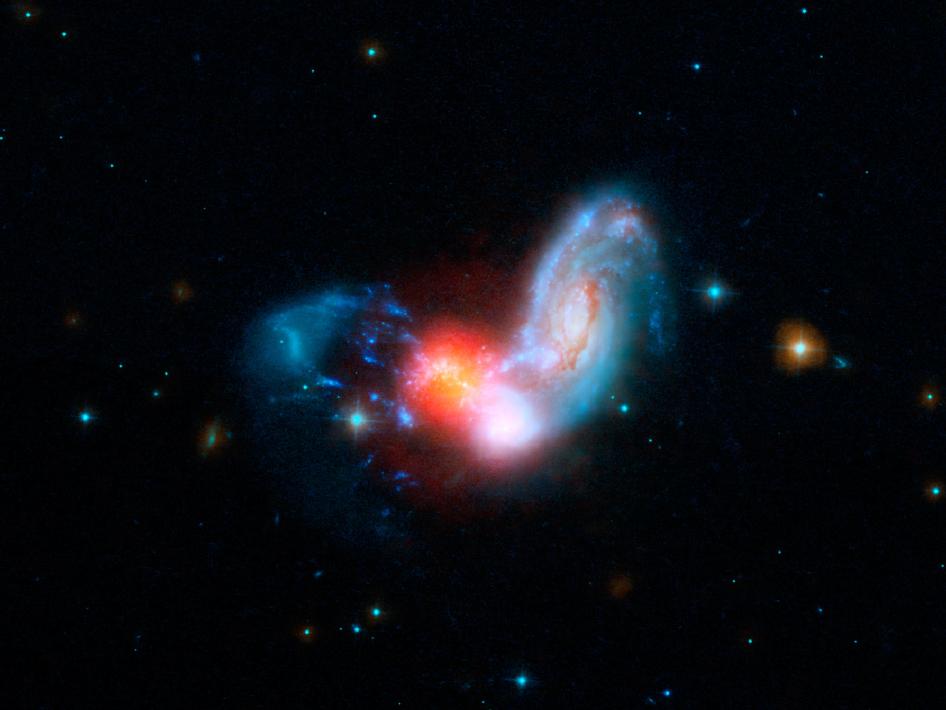 A brilliant burst of star formation is revealed in this image combining observations from NASA's Spitzer and Hubble Space Telescopes. The collision of two spiral galaxies has triggered this luminous starburst, the brightest ever seen away from the centers, or nuclei, of merging galaxies.

The merging galaxies, known collectively as II Zw 096, can be clearly seen at shorter wavelengths of light from Hubble (blue hues).

The real action in this galactic train wreck jumps out in Spitzer's infrared view, represented in red. The brightest glow is from a tiny region that may be as small as 700 light-years across -- just a small portion of the full 50,000 light-year extent of II Zw 096. This region blasts out 80 percent of the infrared light from this galactic tumult. The surrounding shroud of dust renders the stars here nearly invisible in other wavelengths of light.

Researchers were surprised to see such a brilliant infrared glow in an area so far offset from the center of the merging spiral galaxy. Starbursts are often found crammed into the very centers of merging galaxies, but this is the brightest starburst ever seen outside a galaxy's nucleus. Based on Spitzer data, researchers estimate the starburst is cranking out stars at the breakneck pace of around 100 solar masses (100 times the mass of our sun) per year.