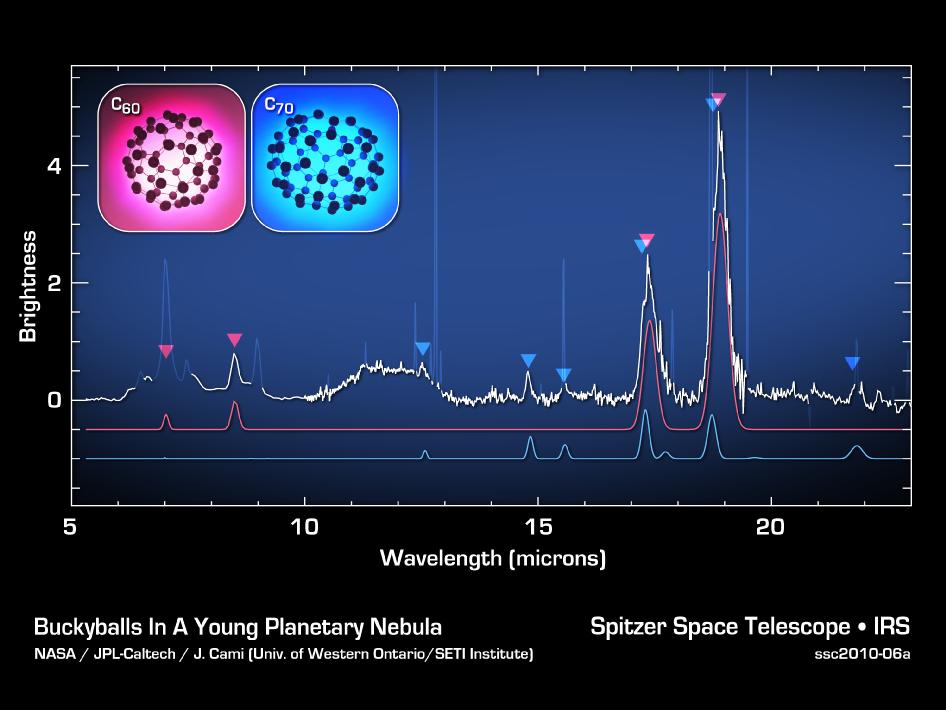 These data from NASA's Spitzer Space Telescope show the signatures of buckyballs in space. Buckyballs, also called C60 or buckministerfullerenes, after architect Buckminister Fuller's geodesic domes, are made of 60 carbon atoms structured like a black-and-white soccer ball. They were first discovered in a lab in 1985, but could not be definitively identified in space until now. Spitzer was able to find their spectral signatures -- along with the signatures of their rugby-ball-like relatives, called C70 -- by analyzing the infrared light from Tc 1, a planetary nebula consisting of material shed by a dying star.

Buckyballs jiggle, or vibrate, in a variety of ways -- 174 ways to be exact. Four of these vibrational modes cause the molecules to either absorb or emit infrared light. All four modes were detected by Spitzer.

The space telescope first gathered light from the area around the dying star -- specifically a region rich in carbon -- then, with the help of its spectrograph instrument, spread the light into its various components, or wavelengths. Astronomers studied the data, a spectrum like the one shown here, to identify signatures, or fingerprints, of molecules. The four vibrational modes of buckyballs are indicated by the red arrows. Likewise, Spitzer identified four vibrational modes of C70, shown by the blue arrows.