Birth of an Earth-like Planet 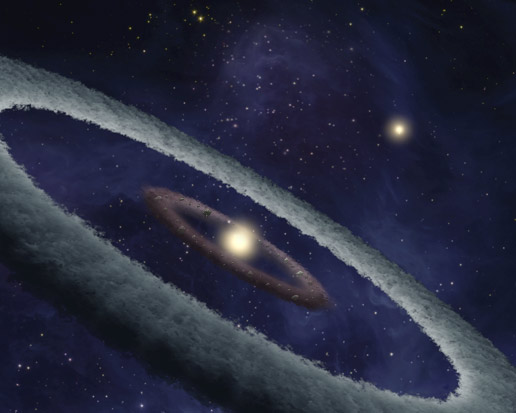 The two yellow spots in the image represent the system's two stars. The brown ring of material circling closest to the central star depicts a huge belt of dusty material, more than 100 times as much as in our asteroid belt, or enough to build a Mars-size planet or larger. The rocky material in the belt represents the early stages of planet formation, when dust grains clump together to form rocks, and rocks collide to form even more massive rocky bodies called planetesimals. The belt is located in the middle of the system's terrestrial habitable zone, or the region around a star where liquid water could exist on any rocky planets that might form. Earth is located in the middle of our sun's terrestrial habitable zone.

Using NASA's Spitzer Space Telescope, astronomers learned that the belt material in HD 113866 is more processed than the snowball-like stuff that makes up infant solar systems and comets, which contain pristine ingredients from the early solar system. However, it is not as processed as the stuff found in mature planets and asteroids. This means that the dust belt is made out of just the right mix of materials to be forming an Earth-like planet. It is composed mainly of rocky silicates and metal sulfides (like fool's gold), similar to the material found in lava flows.

The white outer ring shows a concentration of icy dust also detected in the system. This material is at the equivalent position of the asteroid belt in our solar system, but only contains about one-sixth as much material as the inner ring. Astronomers say it is not clear from the Spitzer observations if anything is occurring in the icy belt, but they believe it could be a source of water later on for the planet that grows from the inner warm ring.