How to Map a Very Faraway Planet 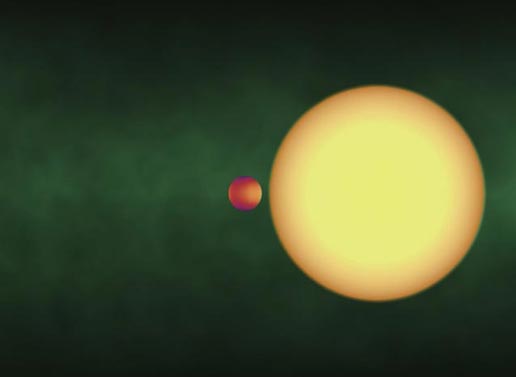 Scientists using NASA's Spitzer Space Telescope were able to create the first-ever map of the surface of a planet beyond our solar system. The planet, a hot and cloudy gas giant called HD 189733b, is located 60 light-years from Earth in the constellation Vulpecula. It is so far away that even the best telescopes can't distinguish the light of the planet from that of its star. So how did astronomers see this planet's cloudy surface?

They used Spitzer's infrared vision to observe the HD 189733 system as the planet, HD 189733b, first crossed in front of its parent star, then passed behind, as illustrated in this movie. HD 189733b is what is known as a transiting planet, which means that it is inclined in such a way that it eclipses its star from Earth's point of view. This planet is also thought to be tidally locked to its star, meaning that one face, termed the day side, always "looks at" its fiery hot sun.

Spitzer began observing the planet when it was between us and the star, with its cooler, dimmer night side in view. As the planet swept around, the hotter and brighter day side rotated into view, and the total infrared light measured by Spitzer went up. The size of this increase in infrared brightness over time told astronomers how the temperature across the entire surface of the planet varies.

Why did the scientists use infrared light? This astronomical trick works best with infrared light, because a planet's own light stands out more in comparison to its glaring sun at this wavelength. For example, if this star/planet system were viewed in visible light, the light from the planet itself would be washed out. Since infrared light tells astronomers how much heat is coming from a planet, it can also be used to determine temperatures.