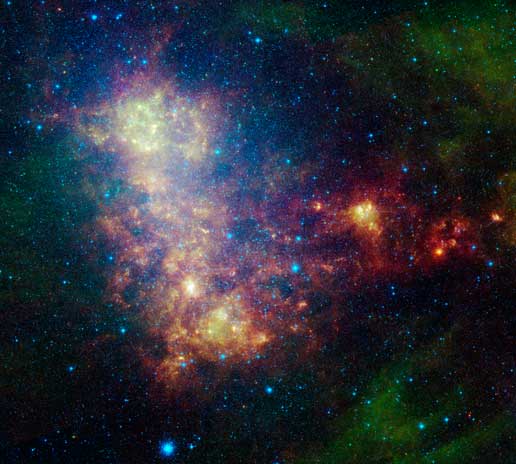 The image shows the main body of the Small Magellanic Cloud, which is comprised of the "bar" on the left and a "wing" extending to the right. The bar contains both old stars (in blue) and young stars lighting up their natal dust (green/red). The wing mainly contains young stars. In addition, the image contains a galactic globular cluster in the lower left (blue cluster of stars) and emission from dust in our own galaxy (green in the upper right and lower right corners).

The data in this image are being used by astronomers to study the lifecycle of dust in the entire galaxy: from the formation in stellar atmospheres, to the reservoir containing the present day interstellar medium, and the dust consumed in forming new stars. The dust being formed in old, evolved stars (blue stars with a red tinge) is measured using mid-infrared wavelengths. The present day interstellar dust is weighed by measuring the intensity and color of emission at longer infrared wavelengths. The rate at which the raw material is being consumed is determined by studying ionized gas regions and the younger stars (yellow/red extended regions). The Small Magellanic Cloud, and its companion galaxy the Large Magellanic Cloud, are the two galaxies where this type of study is possible, and the research could not be done without Spitzer.

The image was taken as part of the Spitzer Legacy program known as SAGE-SMC: Surveying the Agents of Galaxy Evolution in the Tidally-Stripped, Low Metallicity Small Magellanic Cloud.