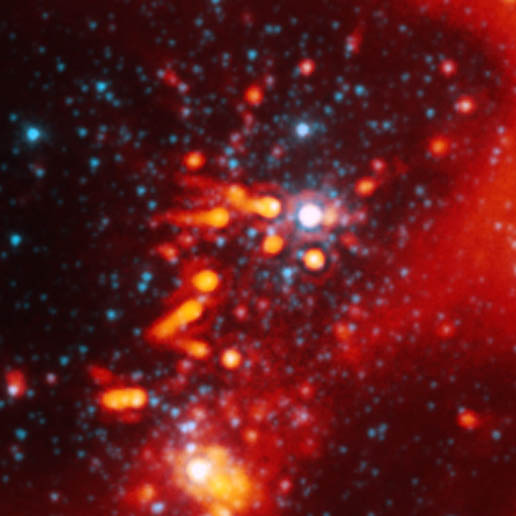 This image from NASA's Spitzer Space Telescope shows the nasty effects of living near a group of massive stars: radiation and winds from the massive stars (white spot in center) are blasting planet-making material away from stars like our sun. The planetary material can be seen as comet-like tails behind three stars near the center of the picture. The tails are pointing away from the massive stellar furnaces that are blowing them outward.

The picture is the best example yet of multiple sun-like stars being stripped of their planet-making dust by massive stars.

The sun-like stars are about two to three million years old, an age when planets are thought to be growing out of surrounding disks of dust and gas. Astronomers say the dust being blown from the stars is from their outer disks. This means that any Earth-like planets forming around the sun-like stars would be safe, while outer planets like Uranus might be nothing more than dust in the wind.

This image shows a portion of the W5 star-forming region, located 6,500 light-years away in the constellation Cassiopeia. It is a composite of infrared data from Spitzer's infrared array camera and multiband imaging photometer. Light with a wavelength of 3.5 microns is blue, while light from the dust of 24 microns is orange-red.