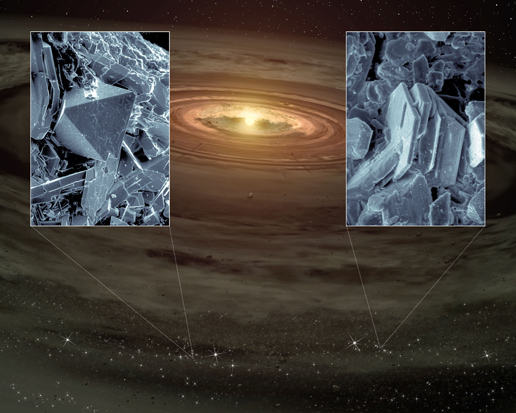 NASA's Spitzer Space Telescope has, for the first time, detected tiny quartz-like crystals sprinkled in young planetary systems. The crystals, which are types of silica minerals called cristobalite and tridymite, can be seen close-up in the black-and-white insets (cristobalite is on the left, and tridymite on the right). The main picture is an artist's concept of a young star and its swirling disk of planet-forming materials.

Cristobalite and tridymite are thought to be two of many planet ingredients. On Earth, they are normally found as tiny crystals in volcanic lava flows and meteorites from space. These minerals are both related to quartz. For example, if you were to heat the familiar quartz crystals often sold as mystical tokens, the quartz would transform into cristobalite and tridymite.

Because cristobalite and tridymite require rapid heating and cooling to form, astronomers say they were most likely generated by shock waves traveling through the planetary disks.

The insets are Scanning Electron Microscope pictures courtesy of George Rossman of the California Institute of Technology, Pasadena, Calif.