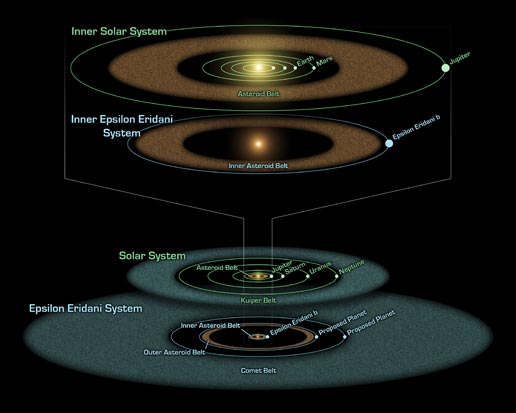 This artist's diagram compares the Epsilon Eridani system to our own solar system. The two systems are structured similarly, and both host asteroids (brown), comets (blue) and planets (white dots).

Epsilon Eridani is our closest known planetary system, located about 10 light-years away in the constellation Eridanus. Its central star is a younger, fainter version of our sun, and is about 800 million years old -- about the same age of our solar system when life first took root on Earth.

In the same way that Jupiter lies just outside our asteroid belt, shepherding its rocky debris into a ring, Epsilon Eridani is thought to have planets orbiting near the rims of its two belts. The first of these planets was identified in 2000 via the radial velocity technique. Called Epsilon Eridani b, it orbits at an average distance of 3.4 astronomical units -- placing it just outside the system's inner asteroid belt.

The second planet orbiting near the rim of the outer asteroid belt at 20 astronomical units was inferred when Spitzer discovered the belt.

A third planet might orbit in Epsilon Eridani at the inner edge of its outermost comet ring, which lies between 35 and 90 astronomical units. This planet was first hinted at in 1998 due to observed lumpiness in the comet ring.

The outer comet ring around Epsilon Eridani is denser than our comet ring, called the Kuiper belt, because the system is younger. Over time, Epsilon Eridani's ring will become wispier like the Kuiper Belt. Its comets will collide with each other and break up, or get pushed out of the ring by the gravitational influences of planets.