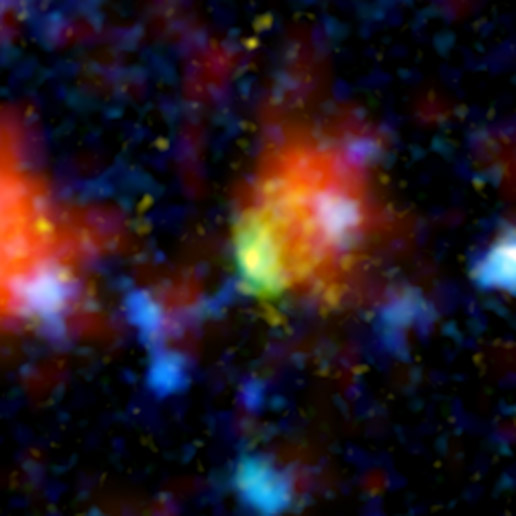 The green and red splotch in this image is the most active star-making galaxy in the very distant universe. Nicknamed "Baby Boom," the galaxy is churning out an average of up to 4,000 stars per year, more than 100 times the number produced in our own Milky Way galaxy. It was spotted 12.3 billion light-years away by a suite of telescopes, including NASA's Spitzer Space Telescope.

Baby Boom is a type of galaxy called a starburst. Like some other starbursts, it is thought to be a collection of colliding galaxies. As the galaxies smash together, gas becomes compressed, triggering the birth of stars. In this multi-wavelength portrait, the color red shows where loads of new stars are forming in Baby Boom, and where warm dust heated by the stars is giving off infrared light.

Green (visible-light wavelengths) denotes gas in the Baby Boom galaxy, while blue (also visible light) shows galaxies in the foreground that are not producing nearly as many stars. Yellow/orange (near-infrared light) indicates starlight from the outer portion of Baby Boom. The red blob to the left is another foreground galaxy that is not producing a lot of stars.

› Full-resolution TIFF
› Back To Top