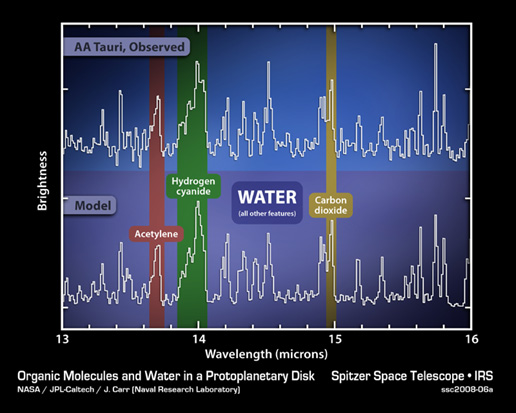 This plot of infrared data shows the signatures of water vapor and simple organic molecules in the disk of gas and dust surrounding a young star.

The data on the top line were captured by NASA's Spitzer Space Telescope's spectrograph, which collects light and sorts it according to color, or wavelength. In this case, infrared light from gases around the star AA Tauri was broken up into the wavelengths listed on the horizontal axis of the plot. The sharp spikes are called spectral lines, and each molecule has its own unique pattern, much like a fingerprint. The pattern of spikes reveals the signature of water vapor along with carbon dioxide, hydrogen cyanide, and acetylene—some of the basic building blocks of life.

By comparing the observed data with a model, shown on the lower line, astronomers can determine the physical and chemical details of the region. The model is constructed by adjusting the relative spectral contributions of each chemical component until the theoretical line matches the observed data. The calculations that went into the model provide information on how much of a given material is present, what its temperature is and how much area it covers.