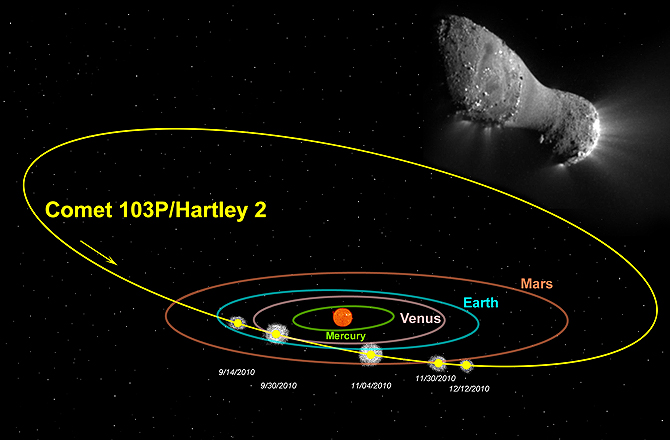 On September 30, 2010, water production on Comet Hartley 2 -- as represented by the hydrogen cloud surrounding the comet seen by SOHO – jumped by a factor of two and half in a single day. (Comet and cloud size are not to scale.) Credit: NASA/Steele Hill
Inset upper right: Comet Hartley 2 as viewed by EPOXI from 435 miles away on November 4, 2010. Credit: NASA/JPL-Caltech/UMD
› View larger
› View orbit illustration
› View comet photo

On Nov. 4, 2010, NASA's EPOXI spacecraft came within 450 miles of Comet Hartley 2, a small comet not even a mile in diameter, which takes about six and a half years to orbit the sun. Designated officially as 103P/Hartley 2, the comet thus became the fifth for which scientists have collected close-up images.

But the comet was also observed from another spacecraft: the Solar and Heliospheric Observatory (SOHO), better known for its observations of the sun. Together, the two returned data about what appears to be an irregular comet, belching chunks of ice and losing water at a surprisingly fast pace.

"By combining EPOXI's direct imaging with several months of SOHO data, we had a rare chance to see a comet in the process of shedding off large amounts of water," says Michael Combi, a space scientist at the University of Michigan in Ann Arbor, Mich., who wrote about his findings in a June 10, 2011 issue of the Astrophysical Journal Letters. "Comets always lose water as they heat up during the approach to the sun, but this was much more than usual. Something pretty dramatic happened in those weeks."

Understanding the composition and behavior of comets intrigues scientists because they are some of the first objects that formed around our sun some 4.5 billion years ago and they’ve evolved little since. These chunks of ice, rock, and frozen gas hold clues to what existed in those early days of the solar system's formation, says Combi. So he uses an instrument onboard SOHO called SWAN – for Solar Wind ANistropy – to observe how water streams off of comets.

SWAN's main job is to map the distribution of hydrogen atoms across the entire sky. This helps those who study the sun's magnetic environment by tracking how the interstellar wind of particles moves through our area of space. But the instrument also can help track comets, which are generally surrounded by an extremely thin atmosphere of water vapor. Under ultraviolet light from the sun, the hydrogen atoms fly off the water molecules at great speed and produce a huge cloud or "coma" of hydrogen. The coma absorbs sunlight and then re-emits it, making it detectable in SWAN images. Observing the clouds can then help determine how much water is being vaporized from the comet over time.

SWAN has collected data on nearly one hundred comets, so when Combi and his colleagues at Michigan learned EPOXI was destined to get a closer view of Hartley 2, they pored over old data from that comet's most recent approaches in 1997 and 2004. Unfortunately, the sun obscured SOHO's view of Hartley in 2004, but the 1997 data was accessible. They compared this to SWAN's 2010 observations from Sept. 14 to Dec. 15.

Surprisingly, the comet's water production in 1997 was three times the amount of water put out in 2010. "We've analyzed multiple comets with short periods like Hartley 2 on repeated trips around the sun," says Combi. "But none of them has shown such a drastic change from one close pass by the sun to the next."

The SWAN data captured another surprise. On Sept. 30, the hydrogen jumped by a factor of two and a half in a single day. It dropped down again some six weeks later.

Standard models of how comets behave helped Combi's team correlate the hydrogen signature to just how much of the comet's surface should be giving off water, a process known as "sublimating," because the water turns directly from ice to a vapor without passing through a liquid phase. The amount of surface area predicted didn't jibe with what EPOXI itself saw – a comet that only gave off water from one half of its shape. But EPOXI also captured images of an extended halo of icy fragments that burst off the comet, most likely flung into space by carbon dioxide emissions on the comet's surface. These ice chunks probably added sublimated water to the hydrogen cloud.

"The rate of water generation being so much higher in 1997 implies that the ice fragmentation was even more severe then," says solar physicist Joe Gurman, U.S. project scientist for SOHO at NASA's Goddard Space Flight Center in Greenbelt, Md. "To me, that means we're watching how comets eventually 'dry up' and become less active with repeated passes through the inner solar system."

Comparing EPOXI observations to SWAN's did not, however, always jibe with current understandings of comets. EPOXI measured cyanide output – an element that tends to be fairly minimal within comets but is so bright that it is easy to measure and indeed was one of the first elements identified in comets in the 1880s. Cyanide output typically correlates to water output, but in this case EPOXI saw a burst of cyanide – it increased seven times on Sept. 17 -- at a time when water production was only gently increasing.

"Analysis of all this data on Hartley 2 is just beginning," says Combi, "So it will be awhile before we figure out all that's happening. But we have here an example of an unusual comet. We don't know if this one had odd behaviors or some different kind of composition – but maybe we'll start seeing things like this, perhaps even in hindsight, in other comets."

With only five comets privy to a near spacecraft fly-by, new data points like this can help refine our understanding of comet composition. It remains an interesting scientific debate whether anomalous comets like Hartley 2 behave differently because they formed of different materials originally or because they've experienced different environments over time. As more analysis of the EPOXI and SWAN data come, the next few years should provide additional insight into these remnants from the very dawn of the solar system.