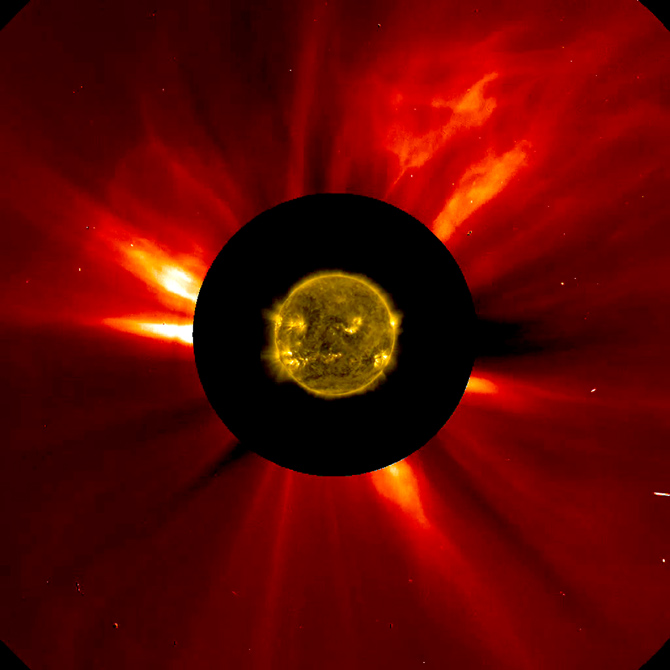 › View larger
› View video of this CME event
This combined image from Nov. 8-9, 2012, shows the sun's innermost atmosphere as seen by the Solar Dynamics Observatory (SDO) inside a larger image provided by the Solar and Heliospheric Observatory (SOHO). A coronal mass ejection or CME can be seen traveling away from the sun in the upper right corner. Scientists can compare the images to correlate what's happening close to the sun with what happens further away.
Credit: ESA/NASA/SOHO/SDO/GSFC
When the Solar and Heliospheric Observatory (SOHO) launched on Dec. 2, 1995, it provided some of the first high-resolution observations of the sun unobscured by Earth's own atmosphere. A joint ESA/NASA mission, SOHO has helped revolutionize our understanding of the sun's interior and complex atmosphere -- home to a variety of giant explosions, including eruptions of solar material known as coronal mass ejections (CMEs). Indeed, before SOHO there was disagreement over what a CME headed for earth looked like. By providing simultaneous images of both what was happening on the sun and further out in the corona, SOHO helped define what occurred during a CME. 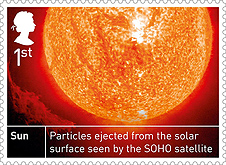 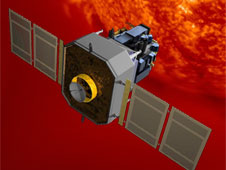 › View larger
Artist rendition of the SOHO spacecraft in space. Credit: NASA Over the 17 years since SOHO launched, the study of CMEs and their effect on Earth's magnetic system has matured into its own specialized field of space weather research, a field in which SOHO is crucial to this day.

SOHO is one of the all-time best observers of CMEs. These blasts of gas and magnetic fields can alter Earth's magnetic system and interfere with spacecraft operations, global positioning system signals, and the power grid. Tracking CMEs are, therefore, a fundamental concern for those who forecast space weather. SOHO's LASCO (Large Angle and Spectrometric Coronagraph) telescopes block the bright light of the sun to provide images that allow us to see the much dimmer structures in the corona. Forecasters use these images to calculate how fast the CME is travelling as it leaves the sun, which in turn helps determine when it will arrive at Earth. SOHO is one of only two space missions with coronagraphs – the other is NASA’s Solar Terrestrial Relations Observatory (STEREO).

Scientists often examine coronagraph data from SOHO in conjunction with the two STEREO spacecraft – each of which views the sun from a different perspective than SOHO does – as well as the Solar Dynamics Observatory which provides high resolution images of the sun every 12 seconds. Together these missions allow a 360° view of the sun from its surface all the way to Earth's orbit -- providing a much more robust picture of any given event on the sun.

For more information about SOHO, visit: