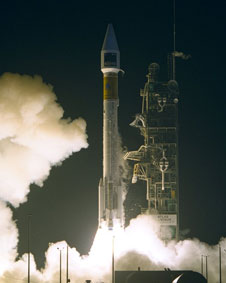 › Download gif
One of the first coronal mass ejection-associated waves observed by SOHO EIT occurred on 1997 April 7. Credit: SOHO/ESA/NASA On December 2, 1995, the Solar and Heliospheric Observatory or SOHO was launched into space from Cape Canaveral aboard an Atlas IIAS rocket. The joint ESA/NASA project began its work observing the sun at a time when the term "solar weather" was almost never used.

Fifteen years later, SOHO has revolutionized what we know about the solar atmosphere and violent solar storms produced by the sun. SOHO has become an expert comet-hunter, nightly news leader and a workhorse that helped create the field of near-real-time space weather reporting as we know it –- but it started as a tool to answer three scientific questions about the sun.

"We were looking for answers to three long-standing problems in solar physics," said Joe Gurman, “the solar neutrino problem, the coronal heating mystery, and the question of what causes solar wind acceleration." Gurman works at NASA's Goddard Space Flight Center in Greenbelt, Md., and has been the U.S. project scientist for SOHO since 1998.

Placed into orbit around the L1 Lagrangian point between Earth and the sun, SOHO was able to observe the sun continuously without Earth ever obstructing its view. With its uninterrupted observations, says Gurman, SOHO has significantly helped with all three original questions.

First, the so-called solar neutrino problem was a conflict between how many neutrinos were predicted by fusion and models of the solar interior versus how many were in fact detected. SOHO confirmed that the interior models were correct and helped show that, instead, the detectors were not finding all the neutrinos since they were changing after they left the sun. Second is the coronal heating mystery, so called because the Sun's outermost atmosphere, or corona, is unexpectedly hundreds of times hotter than the sun's surface. SOHO helped determine that the movement of the Sun’s small-scale magnetic fields themselves could contribute, in principle, sufficient energy to heat the corona. Third, SOHO observed that the acceleration of the solar wind appears to be powered by a special kind of waves that can accelerate certain particles preferentially.

SOHO is perhaps best known for its observations of coronal mass ejections, or CMEs. These blasts of gas and magnetic fields are a fundamental concern for those who track and attempt to forecast space weather. But when SOHO launched in 1995, there was disagreement over what a CME headed for earth looked like. The first ever videos of a CME wave in the lower corona in April of 1997, combined with SOHO’s white light coronagraph observations of the accompanying “halo” CME, changed all that.

Steele Hill, who leads public outreach for SOHO at Goddard, had then only been working for the SOHO team for six months. "It was the first time we had witnessed an event like that. We could track it, predict its direction, and say that in two to three days it will have some impact on Earth.” Hill pulled together some SOHO files and made a movie. . . and it was the first story on the national news that night in April 1997.

An unexpected destiny for SOHO is that it has become the greatest comet-finder of all time. With its data stream available publicly, anyone can be a comet hunter -- and as of November 1, 2010, SOHO had spotted more than 1,940 of them. (A contest to predict the day on which the 2,000th will be spotted is here.) 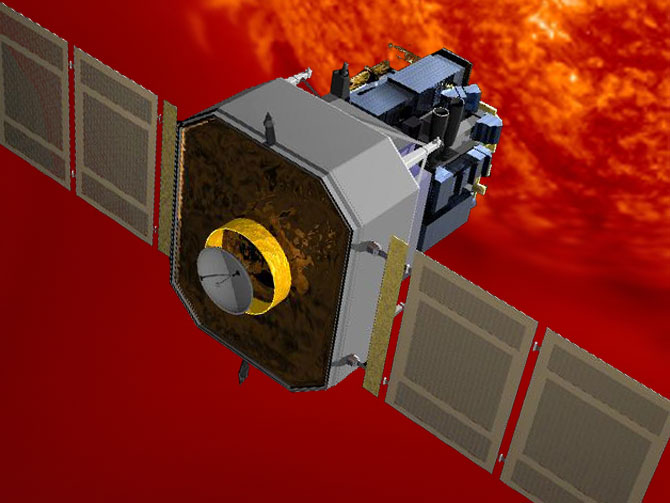 After a good 15-years, SOHO isn't easing in to retirement yet. A long archive of data such as SOHO's is necessary to spot some of the tiniest waves that propagate through the body of the sun. Known as buoyancy or gravity-mode waves, these waves only disturb the surface of the sun at a speed of a millimeter per second.

"That's a pretty hard measurement to do," says Gurman. "With 15 years of observations, we just might have a strong enough signal."

In addition, SOHO is still our only solar observatory to have gathered images of the sun during a solar maximum. The last maximum was in 2000. As we move into the next peak in 2013, it will be SOHO's legacy that allows scientists to compare and contrast what we see now in newer missions such as the Solar Dynamics Observatory (SDO) and the Solar TErrestrial RElations Observatory (STEREO) to what was seen then.

"Every mission stands on the shoulders of the missions that came before it," says Gurman. "Without the success of SOHO we never would have had the opportunity to get even better measurements with STEREO, Hinode, and SDO."